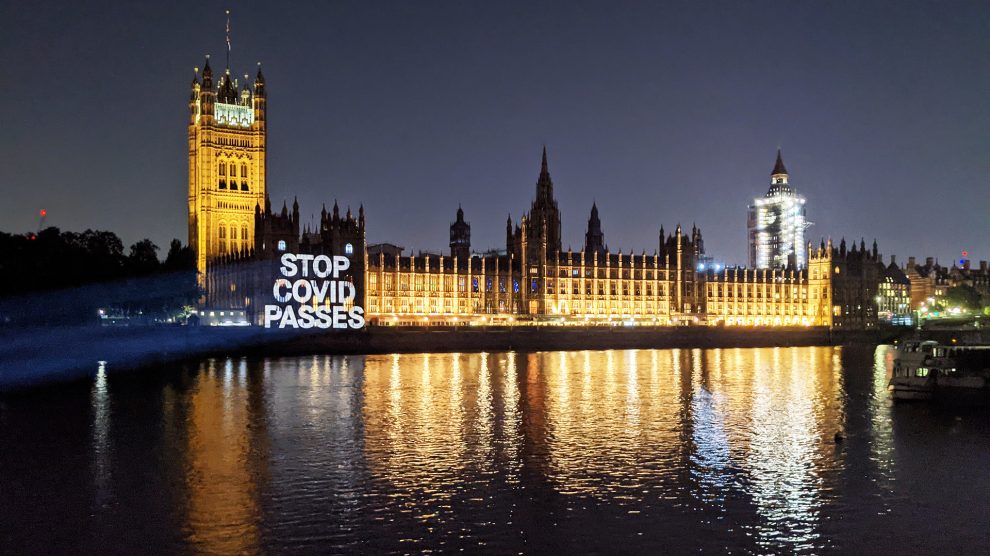 The government’s controversial scheme to require vaccine passports for entry to venues may be scrapped.

Health Minister Sajid Javid told Sky News this morning that the government wants to, “Avoid the use of vaccine passports over the winter, but no final decision has been made.”

He says, “Instinctively, I don’t like the idea at all of people having to present papers to do basic things. I hope we can avoid it.”

Mr Javid was speaking ahead of an expected announcement by Prime Minister Boris Johnson this coming Tuesday.  Mr Johnson may also roll back ‘certain Coronavirus Act powers’ in England which are deemed no longer necessary.

Showing your health status in order to enter nightclubs, pubs or feel the freedom of everyday civil liberties has come under huge criticism. Many MPs, human rights organisations and celebrities have apposed their introduction.

This may of some relief to the night-time economy in Andover.  The Rockhouse nightclub previously told Love Andover they felt nightclubs have been made scapegoats.

If the scheme were to go ahead, members of the public would have been required to show proof they have had two doses of a Covid-19 vaccine in order to gain entry to clubs and other large events. The effectiveness of showing vaccine passports proved unworkable last month when almost 5,000 people who had been double-jabbed contracted Covid at a music festival in Newquay.

Today’s comments by the Health Secretary lessens the likelihood of drinkers being asked, ‘Papers Please’ before being allowed a pint in their local.

The Night Time Industries Association said the plans could have ‘crippled the industry and seen nightclubs facing discrimination cases’. In response, Manchester’s Night-time Economy Adviser Sacha Lord posted on Twitter, “IF the reports are correct this morning… it’s very much welcomed from the Gov’t”.

“This idea has always been discriminatory.”

There has been opposition from Tory MPs sitting in the Covid Recovery Group (CRG) whose leader Ed Davey, described them as “divisive, unworkable and expensive”.

Mr Javid’s comments come a day after supermarket Morrisons have come under fire for their ‘No Jab, No Job’ policy.  The supermarket which is due to be auctioned off for £7bn next month has been accused of taking a “dangerous and retrograde step” after it removed sick pay for unvaccinated staff.

a member of Morrisons staff told Guardian, “It feels almost like the company is coercing people into getting the jab.”

In April this year, more than 1,000 clergymen and women from across the UK have wrote to Boris Johnson to warn against coronavirus vaccine passports, describing them as an “unethical form of coercion”.

They also claimed the documents could herald a “surveillance state”.

The announcement today follows months of campaigning from human rights organisations such as Liberty, Big Brother Watch and Against Vaccine Passports.

A petition calling to ‘Outlaw discrimination against those who do not get a Covid-19 vaccination’ gained over three times the amount of support required to force a parliamentary debate.

According to the front page of many of today’s newspapers, the government will still push ahead with vaccinations for 12-15 year olds, a move which JCVI (Joint Committee on Vaccination and Immunisation) does not recommend.