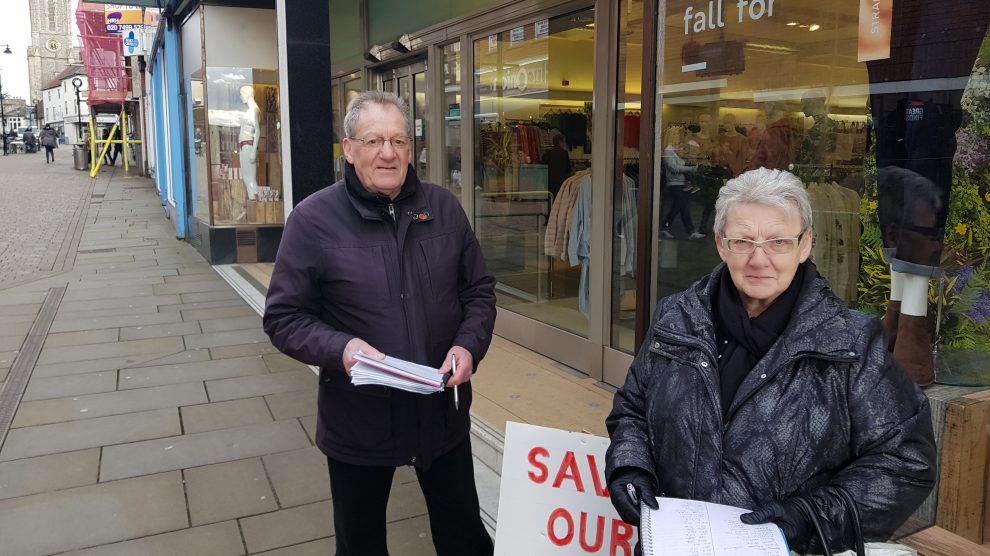 But, when things need saving you can forget the career politicians, Andover has it’s very own super woman.

Within 24 hours of the announcement that M&S earmarked their Andover store in the upper High Street for closure, pensioner Iris Andersen was on the street collecting residents’ signatures for a petition that will be given at today’s meeting.

The list of names collected so far are 3,000+ strong and Cllr North, says, “Kit Malthouse MP and I have secured a meeting with Tony Ginty, in Parliament tomorrow to ask them to reconsider the proposed closure of their Andover store.

“Well done to Cllr Iris Andersen and Cllr John Cockaday who are collecting signatures outside the store for them to remain open. I will also give these to M&S on Wednesday.”

Iris Andersen is a councillor for Andover St Mary’s, but she’s keen to point out that the effort which has had herself and fellow councillor husband John Cockaday standing in near freezing temperatures for the past few days is not political:

“It’s what anyone who cares about this town would do.”

No stranger to standing up for what she believes in, she stood almost alone in the original outcry when TVBC made it clear it wanted to demolish the George Yard public toilet block. The council announced it wanted to make way for ‘five new car parking spaces’.

Mrs Andersen’s campaign has since been significantly progressed by Upper Clatford residents David and Joanne Coole.  They appeared on That’s Hampshire TV this week.

Contrary to claims by online commentators, Andover’s High Street has a higher than national average of business premises occupancy levels. However, the potential loss of M&S will have an unfavourable perceptive effect on the town.

In a mirror of the past, 32 years ago Iris Andersen, a retired nurse, was also instrumental in a successful pressure campaign to get M&S to include children’s clothing in their stock.

In 1986 she told the Andover Advertiser, “I am sure there will be many other mothers who feel as I do. We’ve had to travel to other towns to get clothes for children.”

In January M&S announced a less than favourable Christmas period and information about the closure of some UK site stores hit the media last week.

Whatever happens with the formal representations today, Andover residents can be confident that Iris and John will continue to support what they feel is right for their town – and they’ll always appreciate your support.