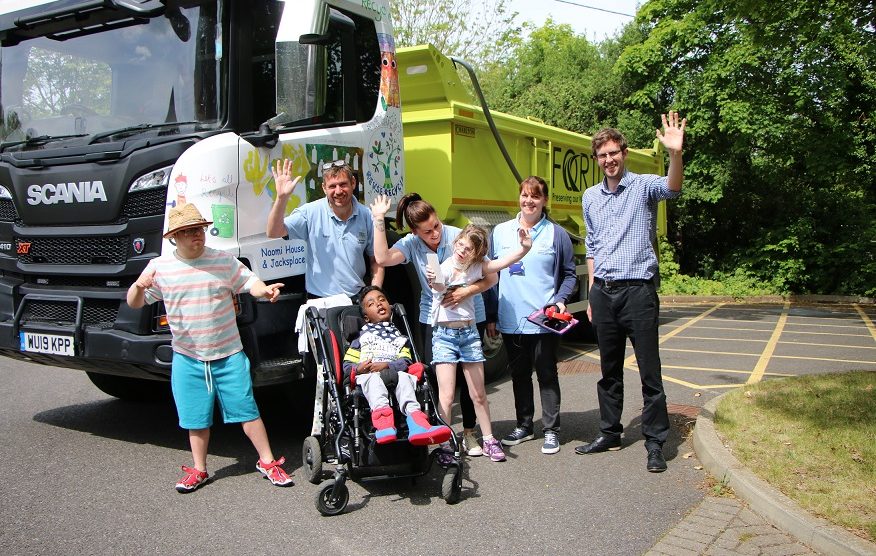 Fortis IBA, a Raymond Brown Company, have been asking children up and down the country to help them out with the very special and important project of revamping their recycling trucks. Naomi House & Jacksplace hospices for children and young adults across central southern England, were asked to lend their creative arts and crafts skills to designing some recycling-inspired artwork for one of the trucks.

Children and young adults spent a fun afternoon getting messy with paints, crayons and glue creating some eye-catching art, sure to catch the attention of fellow motorists. After the truck had undergone its Naomi House & Jacksplace makeover, the team from Raymond Brown drove it to the hospices to show the children and young adults.

Billy Fysh, a young adult who has used the Naomi House & Jacksplace services since he was just four years old, made a special trip to Jacksplace as he was excited to see his piece of art in real life on the truck. As a thank you for his contribution, Billy received a goodie-bag from Raymond Brown and even got to have a go in the driver’s seat.

Each child or young adult whose artwork has been added to the truck received a £10 book voucher from Raymond Brown, and Steve Clasby, the company’s Chief Operating Officer, presented Billy with his.

Steve said: “I want to say a huge thank you to Naomi House & Jacksplace for designing our latest Fortis IBA lorry. It is such an honour to have been able to provide this opportunity to them and to support the work they do. Having met the staff, volunteers and some of the children involved in designing the lorry, I am extremely proud to say it is the latest addition to our fleet. Look out for the truck when you are out and about on the roads!”

Arts and crafts activities are a daily occurrence at Naomi House & Jacksplace as they allow children and young adults who may not be able to verbally communicate, to express themselves in other ways. Huw Bromage, Activities Team Leader for Naomi House & Jacksplace has also said: “We were so excited and honoured to be asked to create some artwork for the Raymond Brown truck. The children and young adults absolutely love getting messy with paints, glitter and crayons and they all had great fun creating some recycling-inspired artwork. A thank you also needs to go to the team from Raymond Brown for the £10 book vouchers they gave each child or young adult who contributed to the truck’s new look, they were very much appreciated.”

Naomi House & Jacksplace are hospices based in Winchester for children and young adults with life limiting illnesses from across central southern England. The charity needs to raise £9.2 million every year to be able to offer vital services such as respite care, end of life care and post bereavement care to families who need it most. More information about the charity can be found by visiting: www.naomihouse.org.uk.