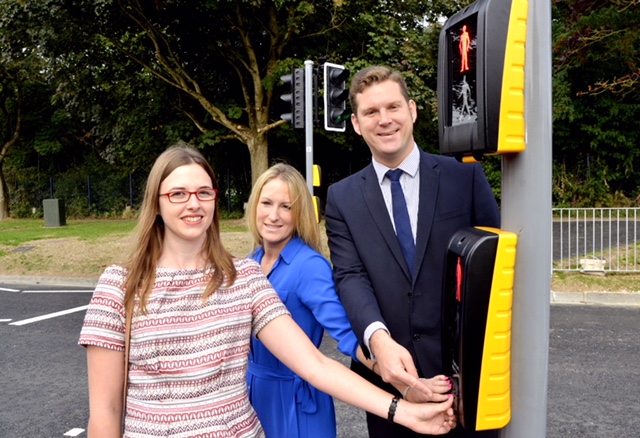 Roman Way pupils have enjoyed a safer start to the school term following a new Puffin Crossing that has been constructed over the summer.

The delivery of a signalised crossing at Viking Way had always formed part of the Borough Council’s legal agreement with the developer of Augusta Park, ensuring that Taylor Wimpey made a contribution due to the additional traffic that that development created.

However, proposals for a crossing had stalled – with the County Council suggesting that they ‘continue to monitor the situation’ whilst considering alternative options to improve pedestrian access.

The breakthrough came last September though, when local councillors and the Member of Parliament were able to persuade the County Council to make the investment even though the complicated national PV2 formula hadn’t at the time been met.

County Councillor Kirsty North said, “I’m delighted that the crossing has now been constructed in readiness for the new school year. This has been a long and hard fought campaign and I would like to thank all the local residents that supported it as well as Cllr Rob Humby for giving the go-ahead.

“I’m particularly pleased that he also agreed to resurface Viking Way whilst the works were going on”.

Cllr Phil North added, “I’ve been campaigning for a safe crossing in this location for many, many years and it’s fantastic it has now been delivered. I thank the County Council once again for listening to pupils, parents and pedestrians and making it happen.”