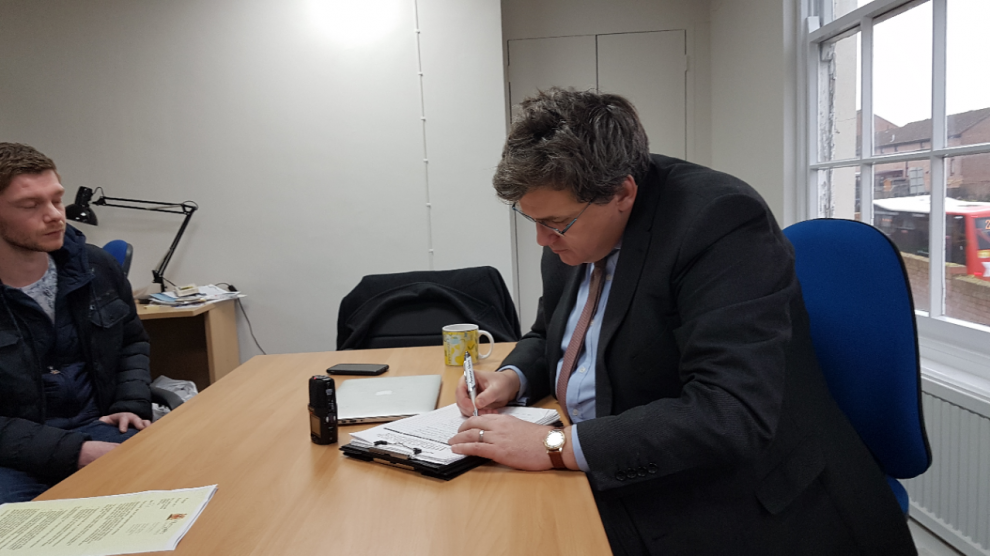 Two Andover Foyer service users had an audience with the Andover MP today who has given his support for the campaign to help prevent the community facility known as The Junction from closing.

Hampshire County Council announced two weeks ago that they plan to remove £56,000 of funding for the facility which provides support, advice and help for young people in Andover.

Alex Leigh and Charles Swatton arranged the meeting at the MP’s offices in Andover, where he gave further support for the campaign saying, “The service The Junction provides is incredibly valuable to the local area. I have already been in correspondence with the county council but will further write in support to help the cause”.

The young people have additionally secured a meeting with the leader of Hampshire County Council on February 16th at County Hall in Winchester.

Mr Malthouse continued, “This is a council decision and I am pleased that Councillor Roy Perry has agreed a meeting with you. Let me know conclusions and if unsuccessful, I will see if i can help any further by supporting you cause.

“The critical thing about junction is getting people who are homeless or suffering with mental health problems to sit down and talk to someone who will help them turn their lives around”.

In a letter to Mr Malthouse, Cllr Perry said, “Due to insufficient funds, we are unable to fund all the projects we may wish to and organisations and increasingly being encouraged to ensure they consider future sustainability of services given reducing public sector funding”.

Mr Malthouse provided Alex Leigh and Charles Swatton with a list of potential other funding opportunities, but offered his continues support if needed for these applications.

Alex Leigh said, “We understand there is only so much the MP can do, but we got a good result, we got the answers we required and thank Mr Malthouse for his support”.

Following petitioning for local people, the young people involved in the campaign have acquired almost 2,000 individual signatures to support their plight.

What a cock up. MOD pays out for killing chickens.
19 year old arrested in drugs raid