An Andover man has been jailed for 12 weeks after admitting stealing perfume from shops in the town.

28-year old Jake Hughes of The Hexagon in Andover also breached a Criminal Behaviour Order (CBO) in committing the offences and was sentenced at Basingstoke Magistrates’ Court.

The court heard that on 20th June this year, Hughes was given a CBO, to last for two years, after admitting similar offences.

The order meant Hughes was prohibited from being abusive, threatening or intimidating to any person in any retail shop in Andover.

He was also banned from entering Boots, Waitrose, Tesco, Sainsbury’s, Poundland, Co-op, Wilko and TK Maxx in the town.

But on 15th and 16th October this year, Hughes stole bottles of fragrances worth a total of more than £400 – on two occasions from Boots in Chantry Way, and once from TK Maxx in New Street.

On Monday 21 October, magistrates jailed Hughes for 12 weeks after he admitted three counts of theft from a shop, and three breaches of the CBO.

Speaking after the hearing, Sergeant Pete Robinson said, “I hope this sentence gives some reassurance that we do take such incidents seriously and that we will look at all options available to bring offenders to justice.

“This kind of repeated behaviour has a real impact on victims, particularly those members of staff on the shop floor who often have to deal with it in the first instance.” 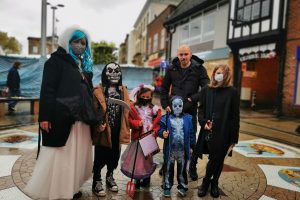