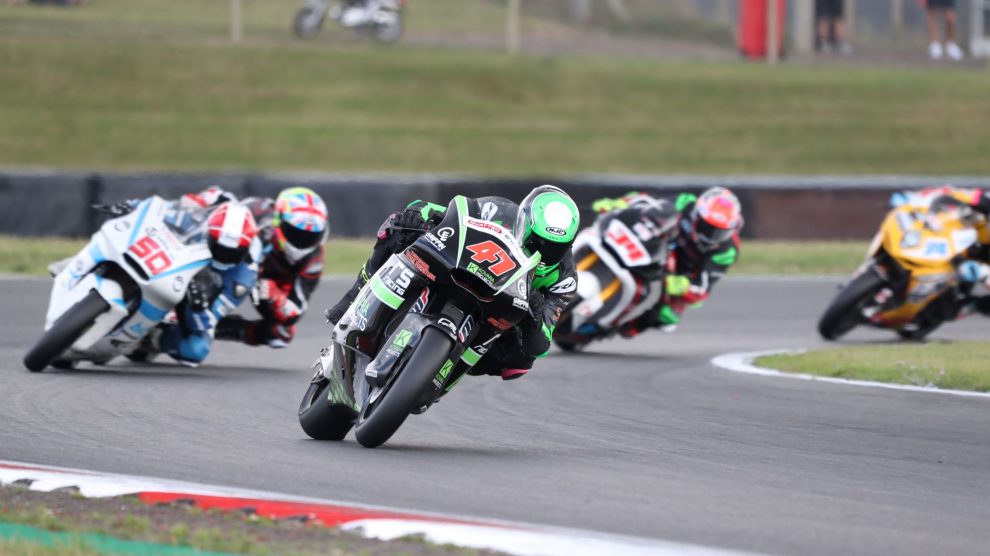 The Snetterton 300 circuit was host to the second round of the British GP2 Cup, the Moto2 support series of British Superbikes.

Andover’s Jake Archer was looking to build on the positive start he made at round one where he scored two eight place finishes. The riders were faced with 40-mile an hour gusting winds during Friday free practice but that didn’t stop Archer as he finished the day 5th quickest.

On Saturday for qualifying, the sky was bright blue dappled with white clouds but the wind had lost little of its strength from the day before. Archer continued his good progress and was running as high as 5th in the GP2 class. After making a final pit stop with around 5 minutes left he was unable to improve on his lap time and his 1:55.251 would see him line up 22nd on the combines Supersport/GP2 grid and 7th in his class.

Saturday afternoon the Sprint race took place. 12 laps of the 3-mile circuit. Archer dropped a place at the start of the race but the race was far from over. Over the next 12 laps Archer traded places with several riders and became involved in five way GP2 rider fight for fourth position. Places were changing regularly and Archer eventually crossed the line in 6th place.

Archer’s second race of the weekend did not go according to plan. He started 15th on the combined Supersport / GP2 grid. On the first lap he was squeezed back to 18th overall before quickly regaining one place and 6th in the GP2 category. He was in a nine rider GP2 but unfortunately, on lap five he hit a false neutral and ran off track. Having lost over four seconds he had dropped off the back of the other GP2 riders. Battling on Archer crossed the line to take 8th place at the flag.

Jake Archer said, “We have made some real progress this weekend. I have felt great with the bike and this is now showing in my performances. We are able to be more competitive. The second clearly was not what we were looking for but we will be back at Silverstone in two week’s time. Thanks to Kovara Projects and my other sponsors including, Griffin Cleaning, City Lifting, HJC Helmets, Radmat and ADS. Also a big thank you to RS Racing for preparing the bike each weekend.”

Jake Archer now has collected points in all four races this season and sits eighth in the British GP2 Cup.

The next round is at Silverstone on the National Circuit on the 4th to 6th September.