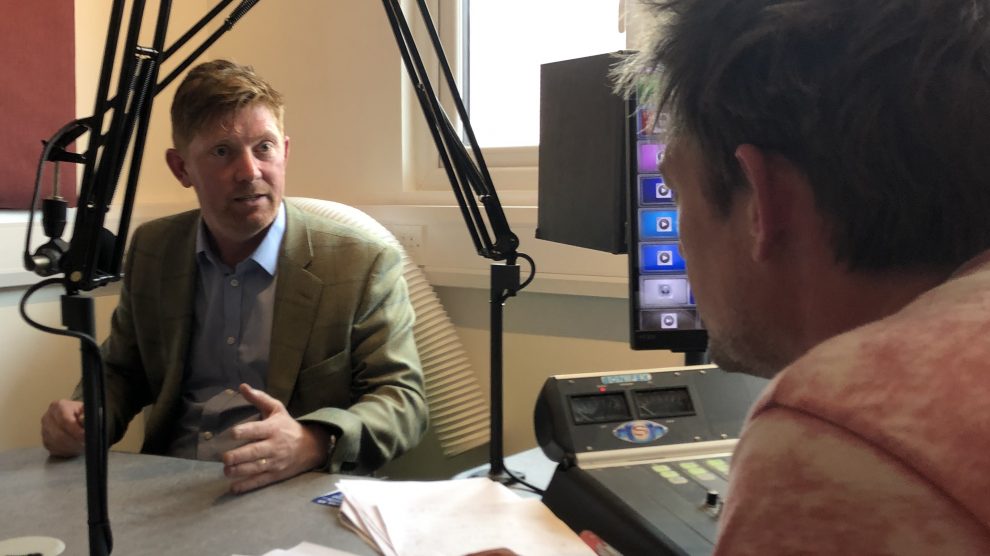 The ex Colour Sergeant travelled to Andover today to exclusive tell the local radio station of a series of connivances within the British military and military charities to hide the plight of the country’s ex-service personnel.

Trevor Coult served in Iraq and Afghanistan. He survived eight bomb blasts and over 70 enemy attacks. He was awarded the Military Cross fighting insurgents in Baghdad in 2005.

The Military Cross is the country’s third highest military honour.

In a stark and frank interview with David Harber, he shared his concerns that the British military were moving towards a European defence unit, in a move that will involve the “tarnishing of the brand of Her Majesty’s military”.

He claims to have information from a retired Royal Navy Admiral that the government are creating a situation where the British public will be fed such information “they will end up wanting a single, European army”.  He does not believe that the UK will leave the EU.

Mr Coult also expanded on recent claims that the major military charities were not making efficient use of monies raised to support ex-service personnel.

“If you were to pay the remainder £25,000 per, year it means the Legion must sell 42 million poppies each year, just to cover their own wages.”

The founder of the For Our Veterans Foundation, Mr Coult also made claims about the increasing number of soldiers who will be prosecuted over their involvement in the massacre in Derry, Northern Ireland in 1972.

‘Bloody Sunday’ was the most significant event of ‘the Troubles’ in the province because such a large number of civilians were killed, by forces of the state. The attrocity happened in full view of the public and the worldwide media.

Last week thousands of bikers flooded the streets of central London to protest against the prosecution of an unnamed soldier who served in Northern Ireland during the Troubles. Known as ‘Soldier F‘, he has been prosecuted by the British government, he has been followed by ‘Soldier B’.

An animated Mr Coult told Andover Radio that he knows of 29 other soldiers due to be ‘persecuted’. He also says as many as 290 others may also face charges.

The ‘soldier the Taliban couldn’t kill’ and author of the 2015 book ‘First Into Sangin’ also expanded on his recent Facebook video where he claims there is defence pact between the UK’s main political parties to “not talk publicly or blame each other for failing the UK’s veterans, or our depleting Army.

The former soldier who was part of a highly trained platoon sent to fight alongside elite Paratroopers as a section commander claims the government will do nothing to prevent veterans; suicides, despite the appointment of a Suicide Prevention Minister.  “75 veterans have taken their lives since Jackie Doyle-Price has been appointed at the minister.  She hasn’t done a single thing.  She refuses to reply to my or hundreds of other veterans’ messages”, adds Mr Coult.

He also makes claims that MPs lie about conversations regarding military forces in Iraq and Afghanistan, citing text messages from [name removed] MP.  He adds that Andover MP Kit Malthouse is “a good guy”, adding “If only we could have a political party made up of only the good ones.”

With additional startling, even politically explosive content, Andover Radio is currently considering, what – if any – of the half hour interview should be broadcast or published in the coming days.

Radio station management believe Mr Coult’s claims are fully founded and in the public interest, but are seeking advice.