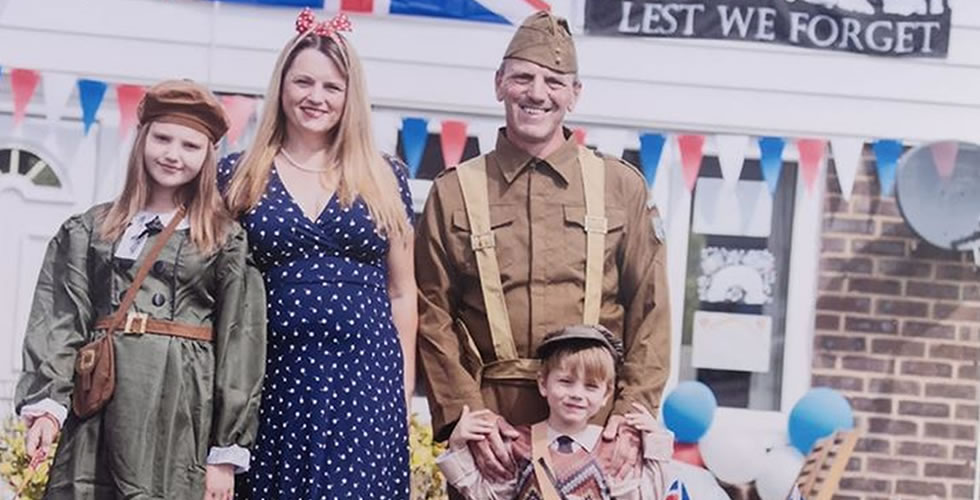 Since Springfield Close resident Jason Briley played ‘It’s Not Unusual’ by Tom Jones on a loudspeaker in his road in March, ‘Dancing in the Street’ has brought people together in Andover.

Roads around town like Highlands Road, Roman Way and Millstream Close have been dancing to ‘just one song’ at 11:00am each morning. The effort is to blow away the isolation blues, have some fun and do a little exercise each day. However, there have been other benefits.

Andover Radio plays a single record at 11:00am each day, encouraging people to turn their radios up and dance on their doorstep.

Since the end of March Jason Briley, a fitness instructor with SuperFit Boot Camp, Mandy O’Neill who lives on River Way and many, many other people around town have been making it a routine to ‘get down’ – always while socially distanced – to enjoy themselves and go ‘Dancing in the Street’.

Every day the Burrows family have been taking part. You may know Plumber Stewart Burrows as Bananaman. His family have been dressing up and dancing each day. He says, “I think our road is 50/50 pensioners and people of working age. If the older people didn’t come out every day at 11:00am, they would just be sat at home on their own.

“But once the dance is over they’ll have a quick chat.

“For many, that will be the only conversation they have all week.

Dressed in his Bananaman outfit, 55-year old Stewart told Andover Radio, “This is better than just being shut indoors, this is keeping everyone together. It ultimately means we can all learn to look after each other”.

Springfield Close has, undoubtedly, been leading the charge on community spirit.

Friday’s VE Day event was of special note. A former soldier with the Royal Hampshire Regiment, Stewart Burrows along with his family of Julia, Eleanor and Jude dressed in 1940s gear and danced to special songs played on Andover Radio from the wartime era.

Other residents dressed as wartime nurses and soldiers, with children dressed as young evacuees.

Throughout the lockdown, residents have been dancing well within government guidelines.

But it’s not just Springfield Close where the daily ‘doorstep dance’ has meant that meaningful conversations with neighbours have been had for the first time. “Never really spoke to my neighbours before”, says Adrian Arnott from Augusta Park. “It’s been an unexpected benefit of the lockdown to get out and talk to people. I’ve learnt that I have lots in common with my neighbours. Who’d’have thought?”

On Friday, many properties around Andover adored their homes with bunting to celebrate the 75th anniversary of the end of hostiles in Europe. The Andover Isolation Help Group based at the Queen Charlotte Inn paused as Andover Radio re-broadcast Winston Churchill’s message on May 8th 1945 at precisely 3:00pm.

Companies like Stagecoach buses were also keen to show their respect:

Roads like Roman Way have been taking part in ‘Dancing in the Street’. Last week’s effort by Andover Radio’s 17-year old superstar Luis Wyatt saw him dressed as Superman and became an internet sensation.

Armed with a costume and props, he put on quite a performance – as you can see in the video below.

The participation of the bin men from Test Valley Borough Council and hundreds of radio listeners was gratefully appreciated. “OMFG crying! The bin men!”, laughed Marie Ponting the originator of the Andover Rocks event which has been postponed until October.

Stewart Burrows told Andover Radio, “We’ve lived here for 8 years and have neighbours where the bloke works 45 minutes down the A303, she works in London. They’ve not long had a baby. They have a busy lifestyle.

“Since we started this we have all become friends.”

Springfield Close has a unique sense of community. Teacher Debbie Jones from Springfield Close arranged for kids of keyworkers at East Street School to dance last week. She says, “Love where you live.”

In the first week of Love Andover posting the daily event, Peta Green said online, “Can not wait to move back on to the close”

Of the Close’s sense of community, Stewart told Andover Radio, “Mavis lives a couple of doors down, and she is 100 years old in a few weeks. She has four carers looking after her each day. But we all look out for her. For the last few years, there’s always someone who will see her out and make sure she gets home safely.

“On Friday we sat her down and she enjoyed the day. Everyone now looks out for each other”.

The photos below are of the residents of Springfield Close, courtesy of Helen Edwards:

“There are some people who are usually a bit shy”, says Bananaman Burrows. “Now, that doesn’t happen. They might have used to jump back into their front door, now after seeing Jason dressed as a chicken getting everyone together, no-one feel that way.

“People seeing us all out in costumes has got everyone involved. I’m not shy, but I would never normally dance in a club or wherever.

Andover Radio plays just one song at 11:00am each morning so everyone can take part. Tune your radio to 95.9FM and turn the volume up. “I believe Andover has a great sense of community” says Andover Radio host David Harber. “It’s the reason I moved back here.

“I think this is great way for people in town to show we are strong, use this unique opportunity to meet neighbours and build up a sense of community that has been depleting since the end f the second world war. I have so much respect for the residents of roads like Springfield Close“.

For now, government rules on social distancing remain in place.

TagsDancing in the Street Springfield Close

NHS staff to get ‘lifestyle’ discounts as thank you
VE DAY: ‘Celebrate our modern-day heroes’