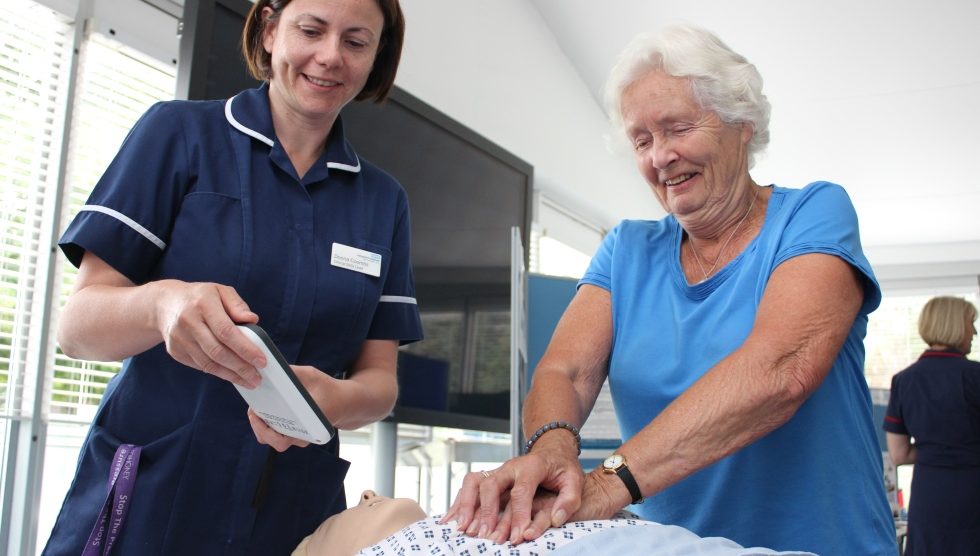 Members of staff from across Hampshire Hospitals NHS Foundation Trust got the chance to showcase some of the great work they do during the Trust’s Annual General Meeting (AGM) and exhibition.

Staff from a wide variety of departments across the Trust, including cardiology, recruitment, radiotherapy and research ran information stalls during the exhibition, giving people attending the chance to take part in a number of interactive activities, including testing their chest compression technique with the clinical skills team.

Elizabeth Padmore, chairman of the Trust, said: “We are all extremely grateful to the staff who put on such an interesting and informative exhibition, giving up their own time to showcase what they do. I hope everyone else enjoyed it as much as I did.”

“Last year was a challenging one but our staff did a phenomenally good job. None of our achievements would be possible without our fantastic staff and I’d like to publically thank every single one of them for everything they do for the Trust and our patients.”

The exhibition was followed by the AGM, during which attendees heard about the Trust’s performance over the course of 2016/17 and its plans for the future.

The audience were told that the Trust, which runs Basingstoke and North Hampshire Hospital, Royal Hampshire County Hospital, in Winchester, and Andover War Memorial Hospital, had hit its targets for the year in terms of planned care, cancer and diagnostic tests, while also improving its performance in terms of either admitting or discharging 95 per cent of patients in emergency departments within four hours throughout the course of the year.

Alex Whitfield, who took up the role of chief executive in April, took the audience through the last year in terms of quality, performance and staff before looking at the Trust’s plans for 2017-18.

She said “Some amazing things took place in 2016-17 and I am extremely proud to be joining the Trust after a very good year.”

“I think the trend in performance in our emergency departments over the last year has been astonishing and other Trusts are now coming to us to ask how we are doing it.”

“The answer is that it’s a real mixture of work that we have done within the Trust and with our partners to ensure that we get people home to their own beds as soon as they are medically fit to leave hospital.”

Malcolm Ace, the Trust’s chief financial officer, told the audience that income was £20 million up on the previous year and the Trust had hit all of its financial targets, ending the year with a £4.7million surplus.

The event, which was held at The Ark, Basingstoke hospital, concluded with a health focus talk from Mr Richard Hindley, a consultant urologist at the Trust, who spoke about advances made in the treatment of enlarged prostates and prostate cancer.

Videos of the AGM presentations and Mr Hindley’s health focus talk can be found at www.hampshirehospitals.nhs.uk.