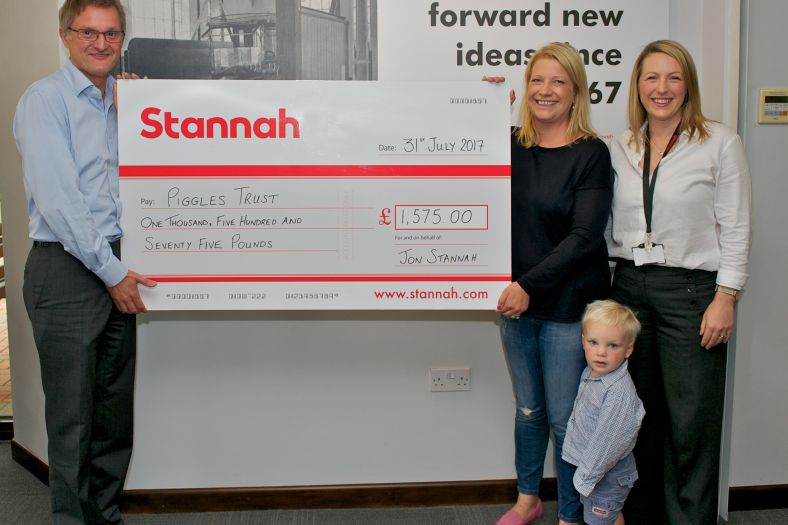 Rosie has managed to reach her fundraising target of £1050 and, thanks to the pledge from Stannah to match funds raised by 150 per cent (to mark this year’s 150th anniversary), the grand total has already reached a whopping £2,625 and is still rising.

To mark Rosie’s fantastic fundraising effort, Jon Stannah presented Caroline Martin, Founder of Piggles Trust and mother of Harriet Martin with a cheque for £1,575.00 at Stannah’s Head Office in Andover.

The funds raised will help to support locally founded charity Piggles Trust, a charity set up by the Martin family from Amport, Hampshire, in loving memory of their daughter Harriet Martin. Harriet tragically passed away at the age of just 4 back in May 2016, and Piggles Trust was set up to honour her memory and to raise funds for early years/pre-school education in hospitals, after the family’s own experiences of the lack of education provision for pre-school children.

Piggles Trust is currently fundraising to appoint a full-time Nursery Teacher within Southampton General Hospital and the grand total raised by Rosie will certainly help to turn this goal into a reality.

Over 100 people took part in this year’s Andover triathlon which was once again held in the scenic grounds of Farleigh School. This was Rosie’s first ever triathlon and the challenge included a 440 metre (20 length) swim, a 30km cycle through some of Hampshire’s most scenic countryside and an 8.3km run through the surrounding local villages on the outskirts of Andover.

After months of intense training for her very first triathlon, Rosie managed to complete the route in just over 2 hours, 28 minutes, a time which Rosie says she is “absolutely delighted with”.

“It was great to take part in the Andover Triathlon, as it was a brilliant event and lots of fun. The first couple of miles of the run, (the last of the three disciplines), was tough Somehow though, I managed to complete the course and I even managed a sprint as I crossed the finish line. Overall, I thoroughly enjoyed the triathlon, which is something I never would have said back in January when I first started training!” she said.

Rosie described the support, both before the race, and on the day as being “absolutely overwhelming”.

“I can’t begin to express how extremely grateful I feel to everyone who has been kind enough to sponsor me so far. The extra funding from Stannah will make such an impact on my final fundraising total and I’m so pleased to be able to donate the grand total to Piggles Trust.”

As well as Rosie’s family, Caroline Martin, the founder of Piggles Trust was there with her husband Edward Martin and young son Toby, to congratulate Rosie at the finish line.

Speaking of Rosie’s achievement, Caroline Martin said “Any amount of fundraising is enormously appreciated by any charity, but when a company like Stannah not only fund match it, but give 150% more then it makes such a significant difference.”

“It means projects we have been working towards for some time become even more achievable in a shorter amount of time, which in turn means people’s lives are being changed. This is the very core of what Piggles Trust aims to do and we can’t thank Rosie and Stannah enough for their support on this journey.”

“Initially our primary goal was to raise enough money to cover the salary of a Nursery Teacher (for pre-school ages) at Southampton General Hospital. Based on the extremely generous donations and support we have received for the charity since it was set up, the ultimate goal would be to one day fund a bank of nursery teachers for pre-school children, within hospitals across the country.”

For more information about Piggles Trust or to find out how you can get involved in raising crucial funds for the charity, visit their website http://pigglestrust.org or contact Caroline Martin on 01264 771166 or at caroline@pigglestrust.com.