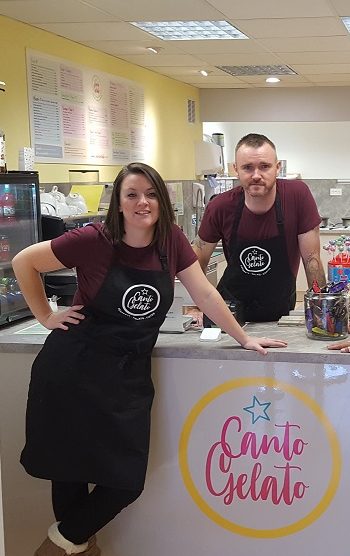 This week we put down the ice-cream cones and pop open the champagne to celebrate Andover’s Canto Gelato two-year anniversary.

Kelly, former food technician at Harrow way community school and her husband Steve, former greenkeeper, thought they would try their luck at whipping ice-cream after spotting an advert on social media.

Kelly told Andover radio “After 22 years of being in hospitality, including running pubs and NVQ assessing I really wanted my own place”

It didn’t take long for Kelly and Steve to win them over with their sales pitch and to be told they were the owners of Andover’s ice-cream parlour.

The couple were extremely excited to open after just 2 months of hard work, giving the shop a complete uplift. Cllr Phil North attended the opening event to cut the ribbon and officially open the doors to the public.

Devastatingly, the buzz didn’t last long. As with every other hospitality trade, Kelly had to shut the doors due to lockdown. Keeping positive though, Kelly and the team work desperately hard to provide locals with deliveries and takeaways to fulfil the public’s demand.

The last 2 years have been more testing than planned but their resilience through the pandemic was astounding and they didn’t let it slow them down, but instead grew. With their hard work and positive attitude, they not only survived but thrived. Adjusting their business to meet the needs of the people, new fresh ideas and menu changes have really shone through, and always with a smile.

Kelly and Steve have fitted right in to the Andover high-street community, always the first to get involved in charity work or community events and supporting the Andover Bid.

Talking to Andover Radio Kelly said “We are so grateful for the support of our regulars and also the local authorities who have been the backbone throughout the lockdown.

“We still have original staff members as well as new staff who have been fantastic, bubbly and loyal.

From everyone at Andover Radio & Love Andover, huge congratulations