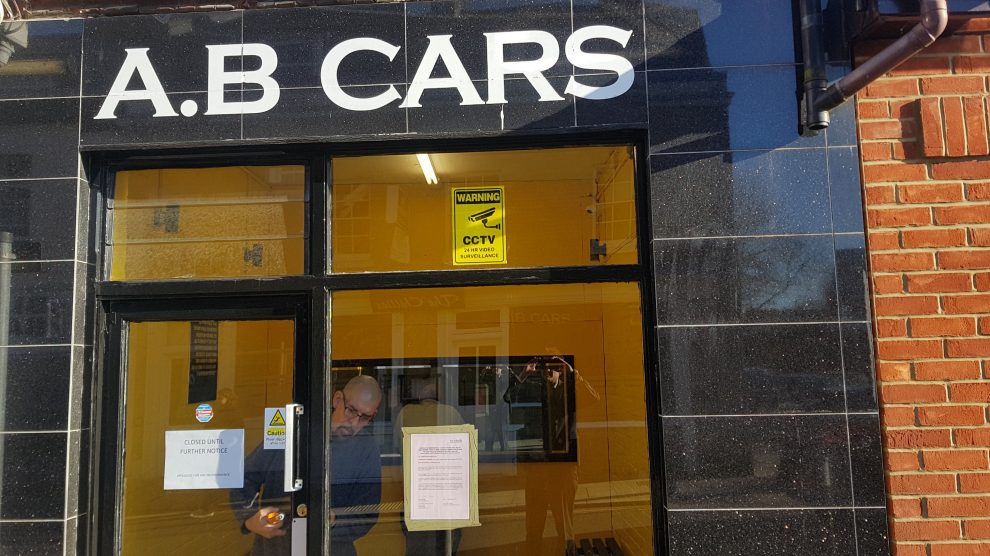 An Andover taxi firm has been told to ‘immediately cease’ trading.

AB Cars on Winchester Street has been subject of a ‘merger’ with Alpha Cars from Basingstoke.  A notice on the taxi office window from Test Valley Borough Council has asked Alpha Cars to ‘Immediately cease operating as an unlicensed private hire vehicle operator within the controlled district of Test Valley’.

The notice addressed to Alpha Cars says that the company do not hold a Private Hire licence.  It reads, “You must immediately cease all functions as an unlicensed Private Hire Operator”.  Failure to adhere to the council notice says that Alpha Cars will be involved in the instigation of criminal proceedings.

Drivers have contacted local radio station 95.9FM Andover Radio to say the found out that they were no longer able to drive today by text message.  The message reads, “Test Valley Council [sic] have shut the office until further notice, we are doing are [sic] utmost to get this sorted and will keep you all posted. Apologies for any inconvenience”.

It is understood that the twenty or more (self-employed) drivers received letters delivered to their home addresses from Test Valley Borough Council today informing them of their move.

Andover Radio understands that there may be some confusion as to which of the two companies drivers have been working for.  Alpha Cars have previously been refused an operating licence in the Test Valley.

We have asked management at AB Cars and Test Valley Borough Council’s Licensing Department for comment.

Andover Radio also approached Andover’s largest taxi and private hire company 1-2 Call Cabs for comment.  Company secretary Ricky Kirkby said, with his tongue firmly in his cheek, “We are currently hiring, any local drivers looking for work should get in contact.  But, on a strictly first-come, first-served basis”.