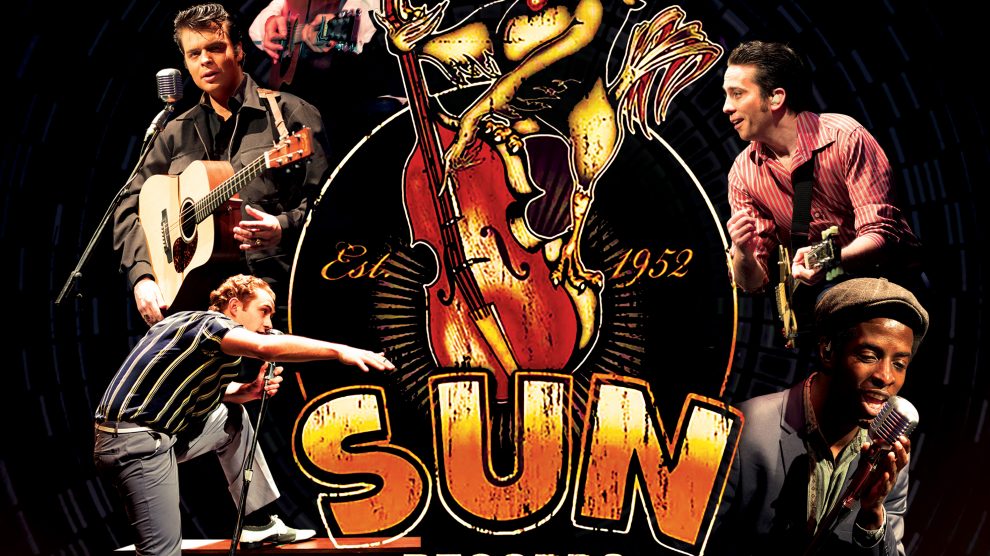 Recognised worldwide as the birthplace of rock and roll, Sun Records in Memphis, Tennessee, is famed for discovering the pioneers of rock’n’roll – Elvis Presley, Jerry Lee Lewis, Johnny Cash, Roy Orbison to name but a few.

The story of Sun has been the subject of TV documentaries, books and even stage shows. But nothing that has gone before has done justice to the ground breaking music that emanated from the famed recording studio, according to concert show producer Pete Tobit…until now!

Officially endorsed and licensed by the Sun Entertainment Corporation, Sun Records, The Concert production show is embarking on a nationwide and international tour.

“During the Fifties, the trailblazing Sun Studio created the songs that became the template of rock’n’roll,” says Pete, “That’s Alright Mama, Great Balls of Fire, I Walk the Line, Whole Lotta Shakin’, Blue Suede Shoes and Good Rockin’ Tonight were all original Sun recordings. Musical visionary Sam Phillips crafted the distinctive sound we know and love today from gospel, blues, hillbilly, country, boogie and western swing. Sun Records, The Concert takes the audience right inside the studio where the magic happened and lets the music do the talking.”

The fast-moving production’s eye for detail – it has been rehearsed in an exact replica of the Sun Recording studio and features the original musical instruments of the era with a youthful cast of consummate musicians – has gained the official stamp of approval of Sun.

John Singleton, President ­­of the Sun Entertainment Corporation says: “From the record label that invented rock ’n’ roll, Sun Records The Concert is the only production officially endorsed by Sun Records. Sam Philips’ recorded the ‘perfect imperfection’ of music. . . how songs were meant to sound live on stage. Sun Records The Concert captures that perfect imperfection perfectly – in a two-hour spectacular that’ll leave you calling out for more!

“From Jackie Brenston, Ike Turner and Rufus Thomas to Elvis, Johnny Cash, Jerry Lee Lewis, Carl Perkins and Roy Orbison,” says John, “this is a production that lets the music tell the Sun Records story like it is. Take your seat and witness the birth of rock’n’roll – as it really happened.”

Sun Records, The Concert, will be performing at The Lights, Andover on Friday 22nd April at 7.30pm. Tickets are available from thelights.org.uk or call the Box office on 01264 368 368.