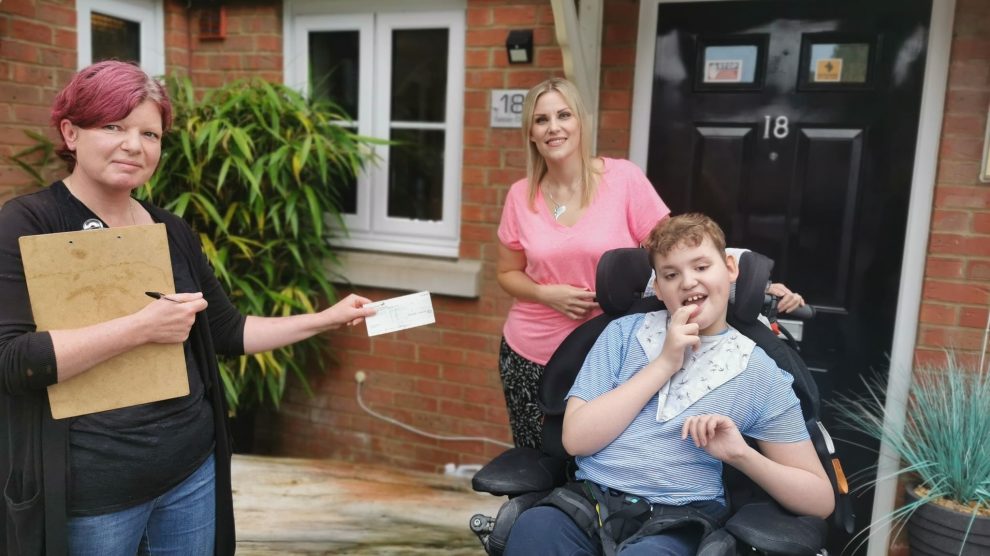 Happy Toby Pearce received a boost to his funraising efforts today (Thursday) as he was presented with a cheque for £1,000.

14-year old Toby who suffers Lennox-Gastaut syndrome, a rare form of epilepsy, can suffer up to 100 seizures a day. His mum Gemma launched a GoFundMe campaign recently to buy her son a new powerchair – but a new unit has a massive £15,000 price tag.

Today Queen Charlotte pub landlady Victoria Harber presented Toby and Gemma with a cheque for £1,000. The funds were raised through customers of the London Road pub who support the charitable organisation ‘The QC Foundation’. However, there is still some way to go.

Toby who seems to be happiest when he’s outdoors and socialisinghas seen a lot of love and support from people around Andover.

“I  will carry on doing it. The more money we get the better it is” adds Cllr Andersen.

Talking to Victoria, mum Gemma said, “Raising money is almost a yearly thing. It’s been quite a task.

“We’re been very lucky, we have really good support from family and friends. And the community we live in has always been hugely supportive. But this has been the biggest target to date.

“Obviously because of the current circumstance, lots of events we havd planned for April and May had to be chancelled, so we have been stuggling.”

Gemma goes on to explain that Toby’s existing chair is no longer fit for purpose. “Toby is struggling in his currrent wheelchair.

“He doesn’t sit comfortably, it’s too small. He had spinal surgery two years ago to correct a curvature and a rotation of his spine, which was a great success but it means the chair he has now doesn’t meet his needs now.

“It also means he experiences a lot of pain in his chair, if he’s in it for more than half an hour. It’s about half an hour before he starts to meanourver himself to get out.”

Mum Gemma writes on Toby’s GoFundMe page: Toby was born on 11th May 2006 and seemed to be a normal healthy 8lb 1oz baby boy.

It was very soon after he was born that I noticed he wasn’t doing things he should, he had no head control, he wasn’t using his hands to grip and he would have lots of jerky movements which would involve his eyes rolling up.

Having taken him to see 7 different doctors, all of whom did not believe there was anything wrong, I finally persuaded one doctor to refer him to a paediatric doctor in Winchester. 2 weeks before his appointment he became very ill and was admitted to the hospital where the doctors there saw the jerky movements I’d been telling the doctors about, it was here that the word seizure was first mentioned. Following extensive tests we were told that our beautiful boy had been having seizures, they told us he would be developmentally delayed but that hopefully by the time he was 1 year old he would have caught up and his seizures would have stopped. Our world was shattered but we held on to those words with the hope he would be ok.

Sadly for Toby that year came and went and it was soon discovered that he was on the other end of the spectrum and instead of getting better he got worse. His seizures intensified and his development never progressed. He was diagnosed with Lennox-Gastaut syndrome, a rare and complex form of epilepsy that is highly drug resistant. He would have up to 100 seizures every day, and was put on various medication concoctions, none of which helped him. One of the drugs he was on for 4 years took everything from him, he was such a happy baby, always smiling but this drug stopped all that, he couldn’t smile or laugh, he lost all head control, couldn’t hold eye contact and slept for up to 20 hours a day.

Finally at 11 years old we were able to wean him off that medication and slowly he began to smile and laugh again, he still had the seizures but his quality of life was much better, we knew then that we had to be very careful with what medication we put him on and also changed our perspective, whilst it was important to try to control the seizures it couldn’t be at the expense of his quality of life. On top of all this he was also diagnosed with severe obstructive apnea syndrome meaning he stops breathing up to 10 times per hour during sleep and need to be monitored constantly.

2 years ago Toby had to have major spinal surgery to correct a curve and rotation with metal rods.

Toby still now can have up to 100 seizures every day and at 14 years old he is mentally and physically around 6 months, but despite all he has been through he is such a happy boy, he lights up every room with his smile, his laugh is infectious and our lives are all the more amazing for having him in it.

Toby has always needed custom made equipment to meet his extensive needs but now due to his size he is needing an adult size chair.

His current wheelchair is now too small and doesn’t meet his needs anymore.

Whilst his spinal surgery was a success it has left him unable to sit comfortably for any more than an hour, he needs to be able to stretch out to alleviate pain and find comfort. He becomes very upset crying and struggles with the pain. Toby loves to go out side for walks, he loves to spend time with his family and loves to Socialise with everyone.

For the last year because of his pain we can’t go more than 5 minutes away from our home in case he has pain and has to get out of his chair, we have had to leave mid way through a family meal because he has started crying, we can’t go out for family days out because he can’t cope with being in his chair. It has impacted his life so much that we have avoided going out.

The new wheelchair is a custom made power chair which allows Toby to lay completely flat when needed, meaning when we go out and he experiences pain he can lay out straight away for as long as he needs, it would make so much of a difference not only for Toby but to his whole family, it would mean he and his younger brother and sister can have family days out again, it would mean Toby and I can go on our walks in the fresh air again, it would mean we can go for a family meal out without the worry that he won’t cope and need to leave. It would mean we can get back to our form of normality without restriction.

Sadly because of the enormity of the needs he now has and it needing to be an adult chair due to his size it comes with a huge price tag of £14,544!

It is the biggest target we have ever had and has been very overwhelming. It is a struggle to raise money for wheelchairs as most charity’s won’t help with them, they assume wheelchair services should be providing a wheelchair but unfortunately this is not the case for us, because of his specialist needs they don’t provide the custom chair that is needed to meet them, leaving it down to us to find the money for the right chair.

We have been doing everything we can to raise the money for Toby’s new chair and have so far been able to raise £4000! But we really need help raising the rest!

As the new wheelchair is an adult chair it will be the last chair he will ever need and will last him for what we hope will be a very long life!

Having this new chair will change everything and make living a life without restriction that much easier.

ENHAM SHOOTING: Update
Read all about it…