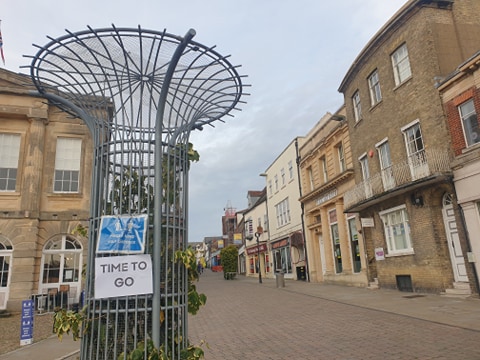 Improvements to the town centre were unanimously agreed with a ‘Love-In’ motion at a council meeting this week.

On Wednesday’s full borough council meeting Cllr David Coole (Anna Valley) proposed improvements to the street furniture in Andover high street, including the removal of the ‘caged plants’ that are strewn across the area.

The Andover Independents Party leader’s proposal was seconded by Test Valley Borough Council leader Phil North. Among the cross-party agreement was the removal of the seven caged plants known locally as the ‘triffids’; each of which are in various states of growth.

“These areas have been seriously neglected and under developed by all previous Borough administrations, despite continual residents complaints.”

Andover Vision is a Test Valley Borough Council funded initiative to ‘look into the town’s its future over the next 20 years’. With Andover Vision, TVBC recently undertook an audit of street furniture earlier this year to identify possible high street improvements.

Cllr Coole adds, “In May 2019, the current Andover Independents Party borough councillors were elected to deliver these improvements and we are delivering.

“We are particularly delighted that the Leader of the council supports us and we look forward to achieving further collaboration to help deliver our other Manifesto Promises.“

The borough’s ‘first citizen’, The Worshipful Mayor of Test Valley Cllr Martin Hatley who chaired Wednesday’s full council meeting, light-heartedly referred to the agreement between the usually dissenting parties as a “Love-in” between the council leader and Cllr Coole.

Cllr North shared online, “Top of my list is the removal of the horrible and unsightly plant cages – which can best be described as being ‘of their time’.

“I’m keen that we consult more widely with the people of Andover to make sure the right improvements are made. Crucially, this includes talking to disability groups to ensure any new street furniture doesn’t become too much of a hazard.”