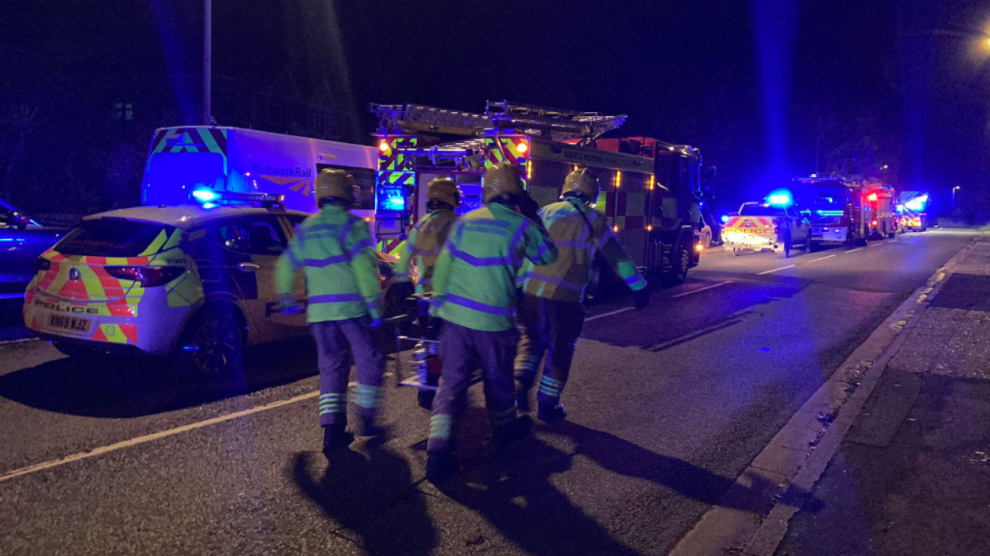 All trains between Salisbury and Andover remain cancelled this morning.

Currently, all trains from Exeter St Davids to London Waterloo are affected.

This is while rail investigators and work teams tend to yesterday evening’s train collision at the Fisherton Tunnel just outside Salisbury.

South Western Railway (SWR) say train services running between Salisbury and Andover may be cancelled, delayed or revised.  They advise disruption is expected until the end of the day tomorrow (2nd November 2021).

Whereas GWR are offer ‘road replacement’ services from Salisbury, SWR currently offer no such solution.

The collision occurred before 7:00pm yesterday when the 17:09 Great Western Railway service from Portsmouth Harbour to Bristol Temple Meads derailed after striking ‘an object’.

The 17.20 South Western Railway service then collided with the train.

At 11.30pm, Dorset & Wiltshire and Hampshire Fire and Rescue Service confirmed they did not believe there to be any further casualties and thanked the local community for their support.

“Firefighters from Dorset & Wiltshire and Hampshire Fire and Rescue Service have been on scene this evening dealing with the train crash this evening.

“We have carried out a thorough search of all train carriages. We have assisted in the evacuation of approximately 100 people. We do not believe there to be any further casualties on board the train and there are no fatalities.

“We will shortly be scaling down our response, however we will have resources on scene for the next few hours.

“I would like to take this opportunity to thank the local community for their support this evening as this incident has unfolded”.

“We were called to Fisherton Tunnel in Salisbury at 6.46pm tonight following reports of a train derailment which involved two passenger trains colliding.

“Officers are continuing to respond to the incident alongside our emergency service colleagues and the line is expected to be shut for some time.

“Thankfully there have been no fatalities however a number of people have been injured and a casualty centre has been opened at a nearby church. Most of these people are walking wounded however a small number, including the driver, have been taken to hospital where their injuries are being assessed.

“A major incident has been declared and this has been a large scale, multi-agency response working closely alongside our colleagues in Wiltshire. We will remain on scene throughout the night working to establish the full circumstances of how this incident came to happen”.

As local radio station 95.9FM Andover Radio broadcast additional local news bulletins last night, journalist Beth Doherty says, “Having received messages from people whose family were due to be on that train, we are so thankful that no-one has died. It’s a sober reminder of why rail safety is so important”.