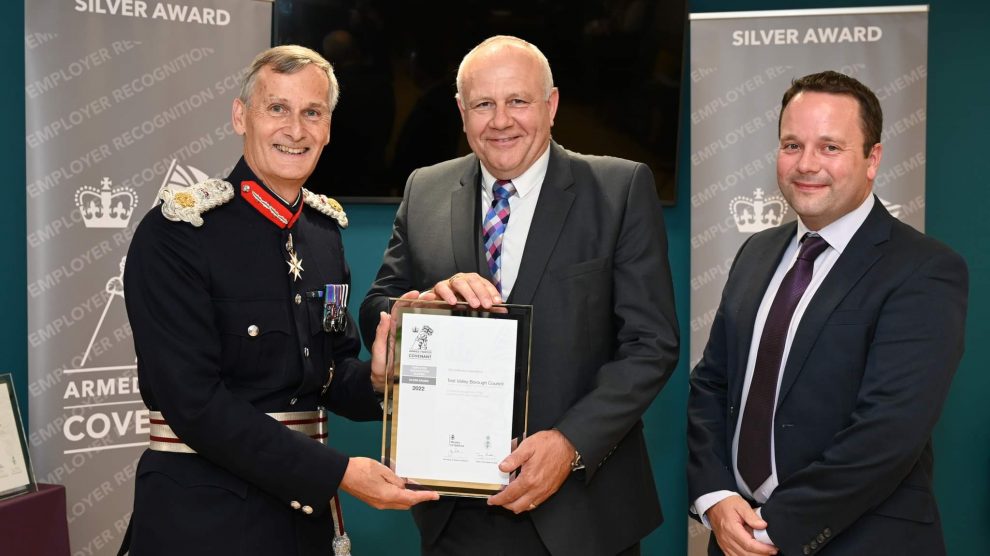 Test Valley Borough Council (TVBC) are celebrating after being awarded the Silver Employment Recognition Scheme Award from our Lord Lieutenant. This award recognises TVBC commitment to our armed forces covenant, supporting our armed services, veterans and their families.

Local councillor and armed forces champion Nick Matthews was the recipient of the award in Portsmouth. This is awarded by the military covenant team, sponsored by South East Reserve Forces and Cadet Association (SERFCA).
It is awarded to companies, businesses or authorities who have gone above and beyond in supporting military families and veterans.

Nick said “A great evening, and humbled to have received our Silver Employment Recognition Scheme Award from our Lord Lieutenant. Thank you to all the CMF (Civilian Military Forum). Let’s continue our momentum, and go for gold”

Nick formed the Civilian Military Forum over 18 months ago, to address the many issues facing military veterans. Their achievements include veterans gathering at the breakfast club at the Royal British Legion, a new community engagement network incorporating our local military welfare and families officers, concession rates on facilities such as the leisure centre, all GP’s to be veteran friendly, implemented free mental health and well-being support for veterans, a new engagement network with forces employment agency and our local business development officer to form more direct support with our local businesses in assisting resettling military personnel.

They have also just established a new further education partnership with Sparsholt/Andover college supporting military families and veterans, including opportunities for veterans to assist in these programmes, including mentoring on uniformed service courses, potential volunteering with cadets and much more.

The Civilian Military Forum is made up of all the people that actually make these things happen. The regular members include relevant council officers from both borough and County, army welfare officers, commanding officers of Middle Wallop and Perham Down, forces employment agency, British legion, SSAFA, community engagement team, CCG/NHS, Places Leisure, MOD covenant representative and of course our local volunteer support organisation Unity. They invite other specialist organisations when we require their input, such as the education authority for the service children support.