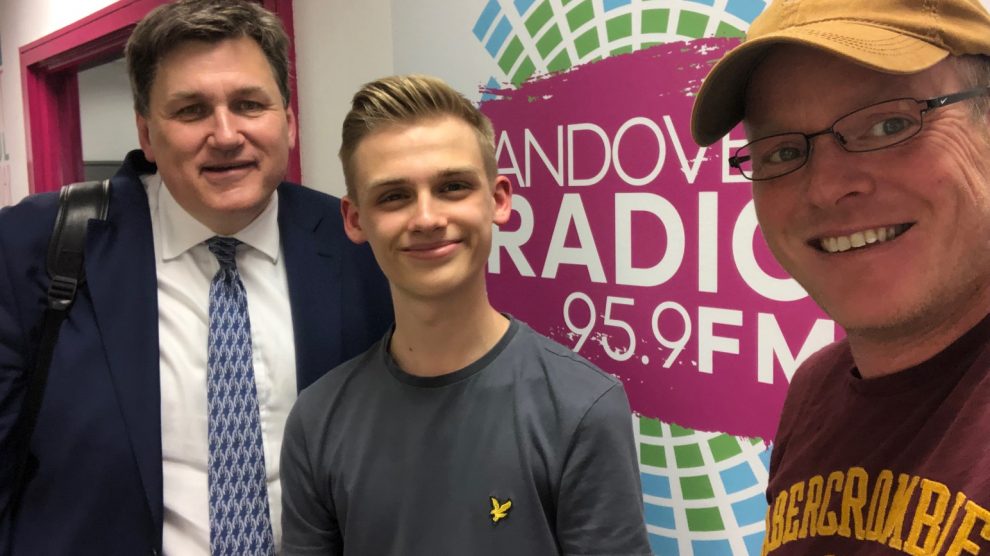 Even though 16-year old Luis Wyatt has been presenting on the radio for six years and he’s been occasionally heard on 95.9FM Andover Radio, Sunday was the first of his regular weekend programmes.

In a recent video post Mr Malthouse, speaking of the Love Andover hub, the Minister for Housing said, “They’re a great organisation that is celebration of what a great place Andover is to live… I really do congratulate them on the place they’ve made for the themselves… even though they gave me quite a grilling “.

Luis loves broadcasting however a big hobby of his is performing arts. He has performed in venues such as The Lights, the Mayflower and Winchester Theatre Royal.

Today Luis can be heard on the school radio station, hosting a special programme about Winton’s sports day.

Within seconds of finishing his final GCSE exam at Winton, he was on the phone to Andover Radio director David Harber asking when he could start.

“Luis has the bit you can’t teach or train”, says David. “He has the enthusiastic passion that you need to succeed. It’s so rare to see it in someone so young. I think it shows that Luis has a very bright future ahead of him.”

The Sam Smith fan will be attending the very competitive Global Academy in Leicester Square from September, working with radio brands like Heart, LBC and Capital Radio.

Luis says, “I wouldn’t exactly call it a hobby but I am a bit of news nerd. I feel it’s really important to know what’s going on in the world around me.” The hours he spent watching the news meant he was fully equipped for that recent interview with Mr Malthouse – which can be heard here.

Luis has also carried out a lot of community work for someone of such young years, including being Carnival Prince and the Mayor’s Mace-Bearer. In addition, he won the Young Person’s award at the Pride of Andover in 2013 for charity work.

Staff at the high street based radio station are excited to work with Luis until he will be undoubtedly snapped up by a bigger radio station. You can hear Luis Wyatt Sunday mornings from 8am on 95.9FM Andover Radio.