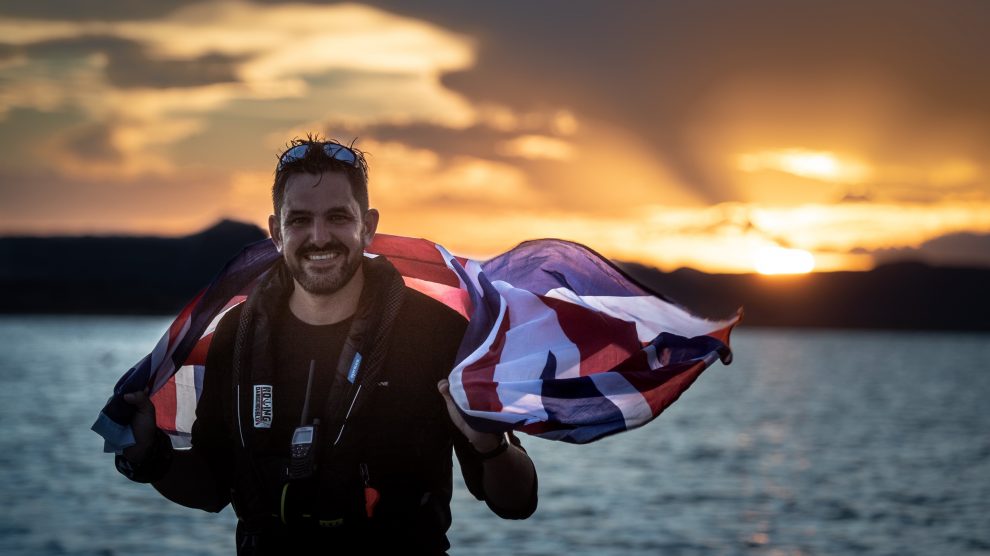 Former soldier and extreme adventurer Jordan Wylie (35) from Blackpool, UK but now resides in the Andover area, has become the first person in history to successfully row solo and unsupported across what is considered the most dangerous body of water on the planet and certainly one of the most geo-politically contested too..

Jordan who is also one of the stars of Channel 4’s Hunted and Celebrity Hunted which is due back on our screens for a new series this month, rowed the Bab El Mandeb Straits, a strategic waterway passage located between Djibouti on the Horn of Africa and Yemen on the Arabian Peninsula. Translated in to Arabic, Bab El Mandeb means (Gate of Tears) which is very apt for an area that is notorious for piracy, terrorism, the smuggling of people, arms and narcotics and also happens to be one of the busiest shipping lanes in the world.

Having never rowed before this year he has trained extensively for the last 12 months with some of the greatest names in rowing including double Olympic champion Alex Gregory MBE and fellow Olympic medallist James Foad with a new specially designed boat built by Rannoch Adventure in Essex, UK. Jordan called his boat “A Million Dreams”.

Mr Wylie who is also the UK national ambassador for Army Cadets is no stranger to danger having served in the British military for over 10 years including service in Iraq and Northern Ireland as a frontline soldier, also ran through three of the world’s most dangerous countries last year which saw him take on long distance endurance challenges in Somalia, Iraq and Afghanistan which has also been documented in his new book, Running For My Life due for release on 7th November 2019 by Biteback Publishing house.

To date the extreme adventurer has raised over one million pounds in the last decade for charitable and good causes through high profile adventures in some of the world’s most hostile and volatile regions. Described by Sir Ranulph Fienne OBE as a “determined fearless adventurer and an inspiring man” there is no stopping this man as he aims to raise awareness of the plight of children affected by war and conflict around the world and uses education to inspire hope and change lives through a charity he co-founded called “Frontline Children”.

Jordan commented from the Horn of Africa:

“To complete a world first is of course very special and an incredible achievement for me personally, it was the toughest thing I’ve ever done. However, what is more important, is that the world takes notice of the humanitarian crisis in Yemen and the sheer number of casualties and losses that are being suffered by children daily, these are the complete innocent victims of this conflict and the world needs to do more to protect them”