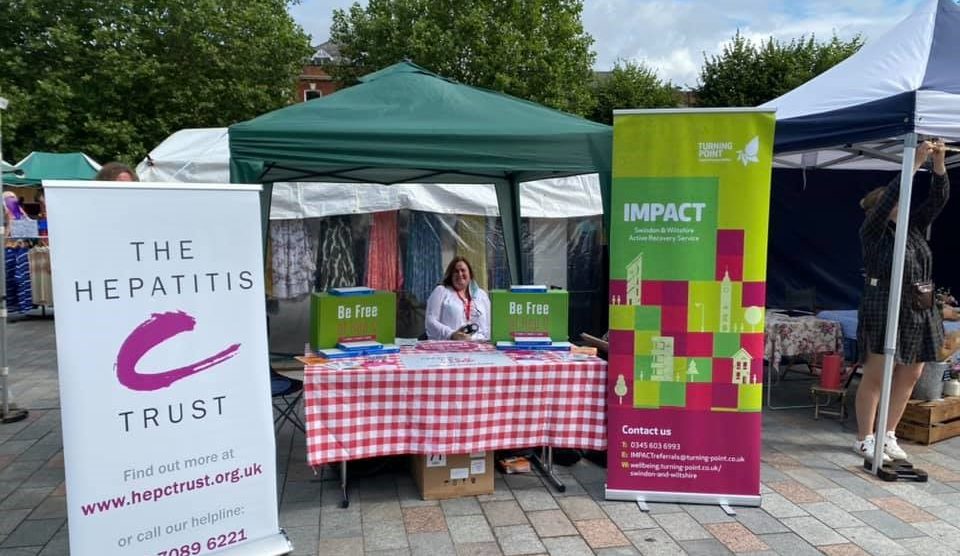 It was world Hepatitis day on Wednesday 28th July. The Hampshire inclusion team have been working alongside other organisations like The Hepatitis Trust and Turning Point.

They have been out and about in various locations to raise awareness of HepC and the importance of getting tested. From the mobile van the team have been offering free testing and supporting people to get the help they need, as part of the elimination programme.

The test is a simple finger prick test or mouth swab and the results are back within an hour.

According to statistics 290 million people worldwide are living with viral hepatitis and are unaware. Viral hepatitis is the inflammation of the liver which damages its functions, and often goes undiagnosed for years as it remains asymptomatic until the later stage.

WHO says “Hepatitis is an inflammation of the liver. The condition can be self-limiting or can progress to fibrosis (scarring), cirrhosis or liver cancer. Hepatitis viruses are the most common cause of hepatitis in the world but other infections, toxic substances (e.g. alcohol, certain drugs), and autoimmune diseases can also cause hepatitis.

There are 5 main hepatitis viruses, referred to as types A, B, C, D and E. These 5 types are of greatest concern because of the burden of illness and death they cause and the potential for outbreaks and epidemic spread. In particular, types B and C lead to chronic disease in hundreds of millions of people and, together, are the most common cause of liver cirrhosis and cancer.

Hepatitis A and E are typically caused by ingestion of contaminated food or water. Hepatitis B, C and D usually occur as a result of parenteral contact with infected body fluids. Common modes of transmission for these viruses include receipt of contaminated blood or blood products, invasive medical procedures using contaminated equipment and for hepatitis B transmission from mother to baby at birth, from family member to child, and also by sexual contact.

Acute infection may occur with limited or no symptoms, or may include symptoms such as jaundice (yellowing of the skin and eyes), dark urine, extreme fatigue, nausea, vomiting and abdominal pain.”

Around 200,000 people are thought to have hepatitis C in England, but only eight out of 10 realise they’re infected and they could unknowingly be putting others at risk.

Symptoms of the virus can take decades to appear but may include sickness, exhaustion and generally feeling unwell.

Sean said that 20% of patients diagnosed with Hepatitis C have never used drugs.

Although the disease is most commonly spread through blood-to-blood contact such as; sharing unsterilised needles and/or drug paraphernalia, unsterilised tattooing and piercing equipment, blood transfusions pre 1992, medical/dental work received in some countries outside of the UK, among other routes of transmission.

He went on to say “Sufferers may have no idea they are infected so along with ensuring the right messages are getting out to people, regular testing and monitoring is very important

If you live in Hampshire, IOW, Portsmouth, Southampton, Salisbury and would like a free confidential test please text 07748747527 and I will arrange a time to visit you at a time that suits you with same day results.”