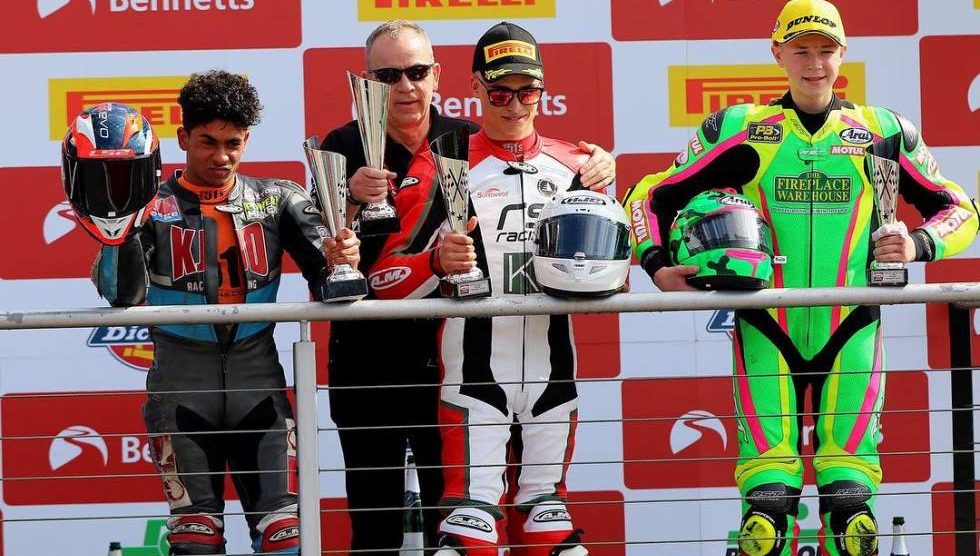 Andover rider Jake Archer got off to a flying start at round one of the HEL performance British Motostar Championship at Brands Hatch last weekend (Saturday 14th / Sunday 15th April) with a win and a lap record.

Archer got off to a good start in the first free practice session with a time of 51.818 and the fastest lap. With just five minutes to go in the second session, pushed hard by team mate Jack Scott and fellow racer Liam Delves, Archer managed a best lap time to record a 49.237 and finish the day at the top of the timesheet.

Qualifying saw 38 bikes packed onto the short Indy circuit and it was Archer who set the pace early on however later in the session Archer struggled to find space and despite his 49.019 he was pipped to pole position by his team mate Jack Scott.

Archer said “Qualifying was a bit disappointing. There was a lot of traffic out there but I know we have the pace for the race.”

The opening race was an exceptional race for the Andover rider despite a difficult start when he dropped to fifth position off the line. It only took him until the fifth lap though to regain control of the race and take the lead where he opened a two second gap over his rivals and a fastest lap time of 49.116.

Archer started well in the second race and was running second behind his teammate by the end of the first lap. On the second lap he hit the front and although he broke away from the rest of the field, his teammate, Jack Scott, managed to stay with him.

By the eighth lap of twenty Archer and Scott were four seconds ahead of the field when they began to hit the first of the back markers and his teammate had the better luck when negotiating his way through them and re-took the lead.

With four laps to go Archer made a mistake although he briefly regained first place he ran wide. He almost lost control as he ran over the cement dust that had been laid to cover a spillage from a previous race but did well to save the bike.

That small mistake was enough to enable his teammate to make a gap which the Andover rider was unable to recover in the few laps remaining. Archer went on to finish second, however there was the consolation that in chasing Scott down, his lap time of 48.921 beat the lap record that had stood since 2001.

After the first round Jake Archer leads the championship with 45 points. The next round is at Oulton Park on the 5-7 May.

Jake said “I was delighted with race one. Everything worked to plan and we got the result we deserved.”

On the second race, Archer said “The lap records a bonus but I’m very disappointed as that silly mistake cost me the race. I’m happy to come away with a win and a second and go on to Oulton [Park] and see what we can do there. Thanks to my sponsors and to Ryan Saxelby, RS Racing, for a superb bike.”