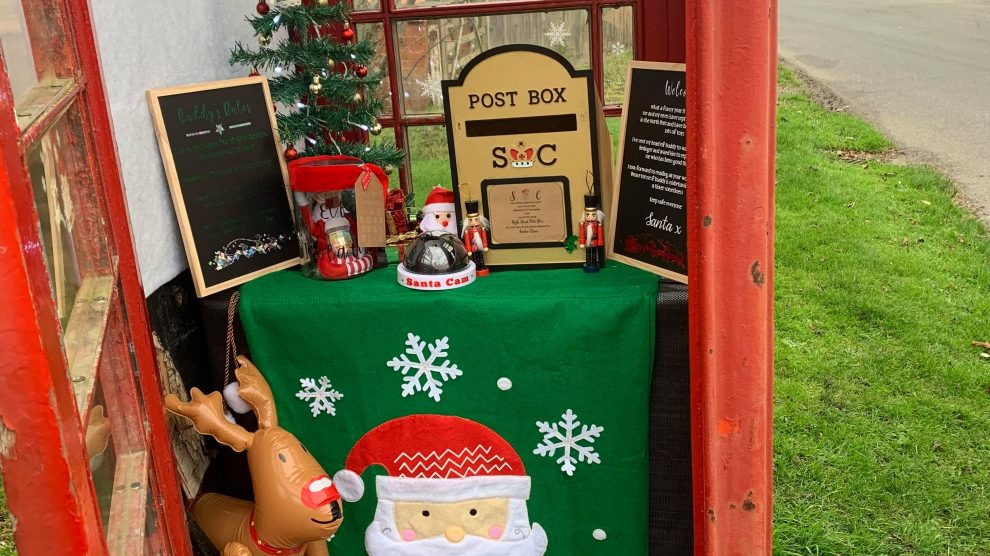 Local Shipton Bellinger resident dubbed ‘Mary Poppins’ has gone creative with one of the local village phone boxes by transforming it into a magical phone box post-box and that the children’s letters will get delivered to Santa Claus.

Tania ‘Mary Poppins’ Ebsworth got inspired to bring some Christmas cheer to the local children after seeing online some creative ways people around the UK have made use of derelict phone boxes. After putting out the message on Facebook and then getting permission to go ahead with her idea, Tania started work on the phone box on the High Street in Shipton Bellinger. Tania told 95.9FM Andover Radio “Myself and my partner have just decorated it with all our little home made niknaks.”

The red telephone kiosk is a British icon recognised all over the world and at their peak in 1992, before mobile telephones, there were 92,000 phone boxes in the UK. BT are steadily removing these from our streets, the ones that are not in use but still stand have had a variety of different uses from library’s to lifesaving machines, by converting it into a public access defibrillator.

Tania got inspiration from seeing some very creative uses and decided (after 5 seconds) to get to work. Tania said “I saw something online before going to bed one evening that a friend of mine had posted, so I mentioned it to my partner. I then pondered for 5 seconds and said to him we could do this.

“I put a post on the Shipton Page to put out the feelers and see if people would be interested… It was a hit, so my planning began. I currently work full time but have had a weeks leave, so what better way to fill it during lockdown than this!!! I don’t have children myself but am know to my friends as “Mary Poppins”, I love the magic of Christmas and can’t help but feel that the magic might be a little lost this year due to COVID, so why not put a little bit back in to the village we so love living in and call our home. It touched my heart when a lady replied to a post to say that her 9 year old son was worried Santa won’t come this year because of COVID and that’s exactly the reason I’m doing it, because children have lost out on so much this year, that I think it’s important they have just a little something which doesn’t cost a penny to make them smile.”

Children can post their letter to Santa anytime at the phone box which is on the High Street in Shipton Bellinger, if you’re coming from outside of Shipton, parents are asked to include a stamp, so that Santa can send the letter to the correct address.

We were able to talk to Santa earlier who said “HO! HO! HO! what a brilliant idea Tania has done and the phone box looks magical, I look forward to receiving lots of letters from the good boys and girls of Shipton Bellinger. I always enjoy that part of the world. HO! HO! HO!”