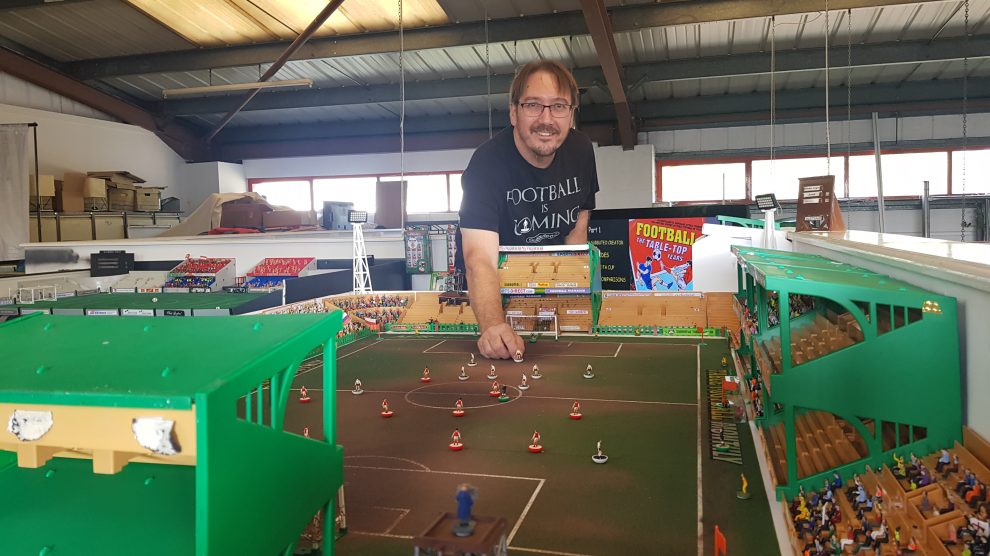 A new retro games club was officially opened on the 26th September bringing back a much-loved game back to a new environment.

The popular game was a huge hit in the 20th Century. Created in 1946 by Peter Adolph the game was a simulation of a football game and at the time used cardboard players on bases. You had to flick your players to ultimately score a goal, with a fun rule set in place it required skill and tactics to obtain your goal. In 1961 a three dimensional was introduced with hand painted plastic figures that evolved after some design modifications to be known as the classic ‘heavyweight’ player until 1980 when the lightweight figure was introduced.

Chris has been an avid Subbuteo player since his childhood and after moving to a new house his love was rekindled. Chris said “This was my childhood thing; I remember playing lots when I was younger and the school holidays was all about this”. Over the lockdown period Chris is part of a Subbuteo group on Facebook that has over 2500 members and has made friends through that who share his love and passion for the game. One of which was Alan Crampton another huge enthusiast who is working on a huge replica of Villa Park. Alan travelled a distance to come and officially open the club.

Chris has been collecting and created some fantastic facilities that he wants the people of Andover to come and use. There are 4 full pitches complete with grandstands and even fans in them as well as many other brilliant to scale pieces to really create the full experience. Chris has amassed a brilliant collection for people to enjoy with many different teams from different eras. Chris added “I have a brilliant collection here with a lot of teams, I am proud to have teams from the 1920’s including their original kits too! With the pandemic I had a bit more time on my hands to build this. Collecting became a habit and with a more disposable income as an adult it was easier to pursue and I really want people to come and use this place for people my age who played this as a kid to relive some of their childhood but also the new generation who probably have never played this before”

At a secret location in Andover Chris has created the club on an invitation only basis. You can find out more on Facebook where there is a group. If you want to come along to Chris’s games night then search on Facebook: Andover Subbuteo Club or message Chris Burford on Facebook or call him direct on 07956 361149