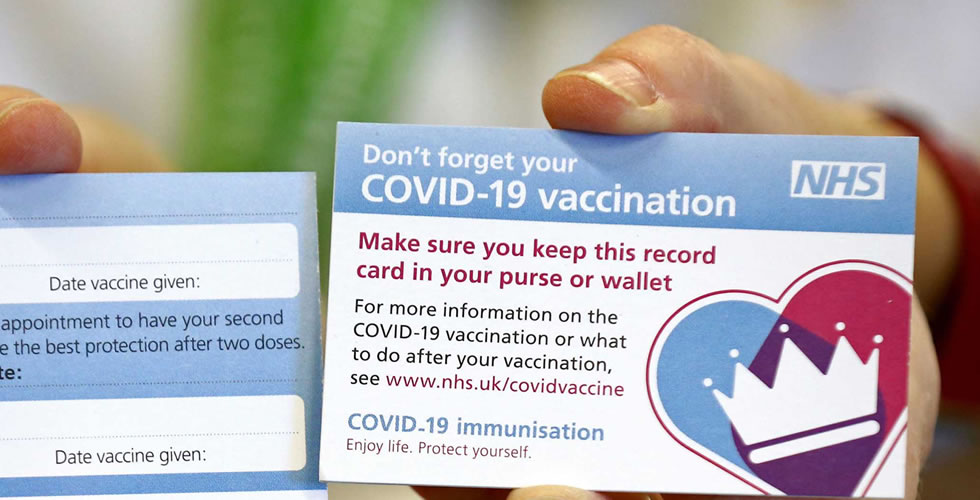 It would be a tragedy if something as simple as having a pint in your local pub became a reason for giving your unquestioned consent to the carrying of a ‘vaccine passport’.

Whereas in our desire, need and eagerness to get back to a more normal way of enjoying a social life, it should not be overlooked that we may well be being turned into a nation which is dominated by authoritarian control, sinister surveillance and super-regulation.

A government review into the possible use of ‘Coronavirus passports’ is taking place.

Although the Prime Minister said today that drinkers will not need to prove they have had a vaccine when pubs open (for outside customers) in a few weeks’ time, he did add that it was a ‘bit premature’ whether this might still be the case when they open more fully in May.

These ‘Coronavirus passports’ are certificates or cards that will prove someone has had a Covid-19 vaccination and they will be linked to the identity of the card holder.

Biometric and identity management companies Mvine and iProov announced the trials of their Covid-19 immunity and vaccination passport earlier this year.

Today’s frontpage headlines of The Sun and Daily Mail respectively claim, “No Jab No Pint” and “Vaccine Passport To Go To The Pub”.

Whereas the inference is that landlords may have the powers to bar punters from entering the premises without proof of a jab, I fear this will evolve into a not just unchallenged, but unchallengeable level of total control.

This card introduction effort is being applauded by some people who simply want to get out and about, see friends and not worry about the risks of catching ‘the virus’.

But, that’s a genuinely worrisome scenario.

Many people are already openly applauding and welcoming these measures – measures that just a year ago would only have been considered appropriate in a ‘police state’ or in countries with murderously authoritarian governments.

Liberty should remain at the fundamental core of being British.  Have we not fought on the beaches and the landing grounds for basic human rights and freedoms?

It was February 21st 1952 that Winston Churchill’s government scrapped the wartime ID cards. The reason, in his words, were “to set the people free”.

Kate Nicholls, CEO of the hospitality sector trade body UKHospitality says, “It is crucial that visiting the pub and other parts of hospitality should not be subject to mandatory vaccination certification.

“Even introduced on a voluntary basis, vaccine passports have the potential to cause huge amounts of confusion.”

She adds that the system would be unworkable for pubs, noting that venues could find themselves in a situation where young staff members (due to be vaccinated last) are able to work in the pub, but not able to visit it socially.

Steve Baker MP, deputy chairman of the COVID Recovery Group said, “The Prime Minister began to tread a dangerous path when he opened the door to domestic COVID certificates.

He said we are heading for a two-tier Britain that “prevents pregnant women from taking part in society, given that the government is telling them not to take the vaccine.”

Almost all news content you receive will be unhesitatingly happy to share with you that current vaccines protect against severe disease, but I have yet to read any clear and concise evidence that this stops transmission nor can I see with any authority how quickly immunity wears off.

And then, obviously, there is no evidence whatsoever of how it works with the inevitable variants we will soon learn about.

Oh, and you must be aware of the huge levels of restriction and control that had been placed on hospitality venues, whereas those controls were entirely missing from supermarkets and the like which have been permitted to remain open throughout a pandemic. A pandemic where Poundland became ‘an essential shop’.

I absolutely accept that ‘the virus’ has taken a massive toll on everyone, physically, emotionally and of course economically on the country as a whole.

But, I really must draw comparisons with the ‘Track and Trace App’ last year which was deployed by government unlawfully and raised huge concerns about user privacy, government surveillance and massive amounts of data sharing.

The UK Government, with a suspicious quietness about them, has already been in consultation mode to ‘track and trace’ us all.

I do not consent to having my personal data used without permission.  For reasons nefarious, or indeed otherwise.

I fear a sinister element in all this.

I work in an environment where the same story or article must be written in three different ways because of the three different bits of legislation (and expectation) that control what I can or can’t say.

The famous ‘published and be damned’ expression for printed publications (originally called ‘libels’ – I’ll leave you to make the obvious connection there) is increasingly less relevant to explain press freedom.

The rules for broadcast radio are the strictest of all.  Unlike this website or indeed the Love Andover Observer, Andover Radio is licenced HM Government; and to their rules, we simply must obey.

The internet has the least amount of obvious or de jure control, however I really cannot even write the name of the political party which grew to all pervasive power in Germany in the 1920s and 1930s for fear of being banished. Writing that N-word would mean the digital behemoths that already control your access to information would ‘devalue’ this very article on the grounds of it being ‘conspiratorial’ or some such.

Identity cards (all in the name of ‘national security’) have historically produced dreadful and horrifying results.

Do not go gentle into that grateful obeyance.

If you were to agree with anything above, sadly the places where you can have the freedom to openly share your views have already been controlled.

And even if you do express concern over your reducing amount of personal privacy and freedom – your refusal to ‘hand over your papers’ means that a pint down the local could still simply be verboten.

This is an opinion piece by David Harber. We occasionally share opinion pieces to spark debate or conversation which may not necessarily be the view of the Love Andover organisation.