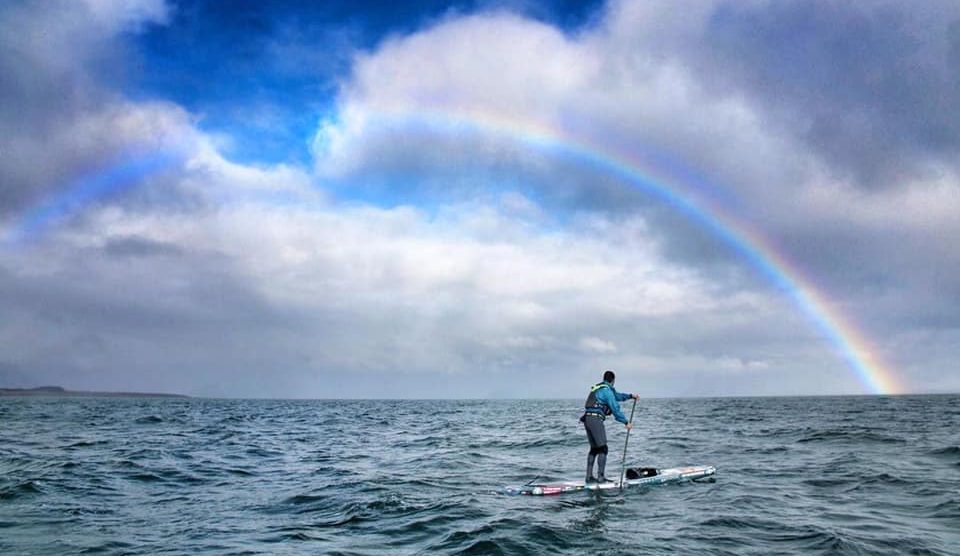 The Great British Paddle has crossed the half way point after Jordan Wylie made it to Scotland and has so far raised over £18,000. Jordan has now paddled to 5 countries covering over 1800km over 104 days on the sea.

Jordan started the world record attempt at the end of July and has endured a gruelling expedition battling the elements and has suffered setbacks through injury, boat repairs and the bodies of water, but that has not stopped his goal. Jordan is doing this to raise money for Frontline Children, the mission is to build a new school on the horn of Africa.

Reaching this milestone came with a brilliant day on the paddle board as Jordan completed a personal best by covering 77.19KM from the edge of the bay at Belfast all the way to the Mull of Kintyre. Jordan started at 1pm and went through until 7:30am the next day.

Jordan told 95.9FM Andover Radio “After 104 days of paddling and crossing the Irish Sea for a second time, I’ve finally made it to Scotland which is the half way marker. I’ve paddled over 1800 kilometres so far and I really feel like I’ve had to earn every paddle stroke.

“With Covid-19 disrupting everything we do, I still don’t know when my journey will end but I will keep going for as long as I’m aloud to. So far we have raised more than £18,000 and rising which is a testament to the generosity of the public, even in these uncertain times. It’s getting colder and harder every day but remembering my “why” is what keeps me moving forward”

This is a feat that has been attempted previously in recent years, but to date no person has been successful in achieving this highly ambitious endeavour, due to the extreme physical and psychological barriers, combined with the relentless and unpredictable British weather system all year round. Jordan, who is no stranger to risk or danger, served in the British Army for 10 years, and ran through the 3 most dangerous countries in the world in 2018, which was also the subject of his latest book; Running For My Life.

You can follow Jordan by subscribing to his YouTube channel and you can donate and support Jordan’s cause here.

Jordan continues to keep in good spirits and couldn’t resist a Halloween dress up.