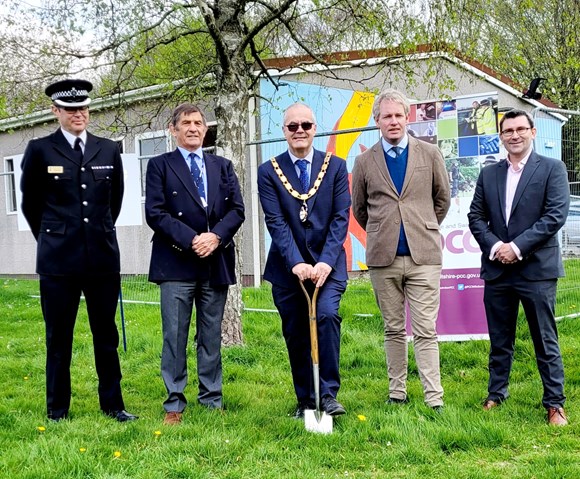 A ground-breaking ceremony has taken place to mark the building of Tidworth’s new £7.3M Civic Centre which will also house the town’s new community police station.

Tidworth Mayor Mark Connolly cut the turf to officially signal the start of the work with Police and Crime Commissioner Philip Wilkinson looking on to symbolise the joint venture between the OPCC and the Town Council.

The new building replaces the town’s ageing community centre and police stations in Tidworth and Amesbury which were no longer fit for purpose for modern policing.

“This is a great day for East Wiltshire as there will be a fully formed community policing team, both neighbourhood and response, that will be looking after their local community.

“It’s a key part of my Police and Crime Plan to have a major station to cover the north of the county, which is Gablecross in Swindon, one in the south in Salisbury, or as close to Salisbury as we can get, three in the West to cover the major
towns of Melksham, Chippenham and Trowbridge, with a community police station in Tidworth to cover the East.

“The joint funding model with Tidworth Town Council means this project represents value for money and will allow us to better coordinate our activities with the military community, which plays a major role in the town.

“This partnership allows us to build a police station which is a better facility for people living in Tidworth, is more accessible and creates a better working environment for our officers.

“It will offer the police what they need as well as the council and the local community.

“I look forward to seeing the new station open next year”

Tidworth Town Council have committed £5.3M to the funding of the project with the Office of the Police and Crime Commissioner contributing £2M.

Neilcott Construction will begin work on building the new station in July with the opening date planned for August 2023.

“We’ve been talking about a new Civic Centre for many years and to actually put a spade in the ground, knowing it’s going to happen and we’ll be moving into our brand new facility in August 2023 is great.

“Our old community centre used to have one bookable room. This new building means we can host a number of groups at the same time meaning it will be a real community hub.

“Working together with the Police, and Neilcott Construction means we can deliver a project we can all be proud of”

“This gives us the best of both worlds. We’re working with our partners, people who are key to us delivering policing around the community, but it also gives us our own space to work on confidential matters.