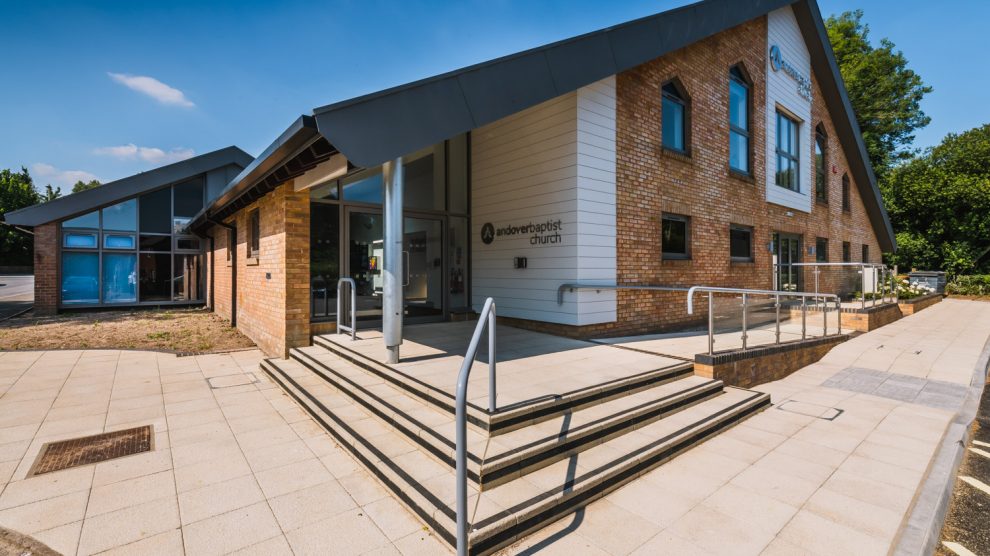 Many older readers will still remember the original Baptist Church situated in Andover High Street, with its imposing iron fence and weathered exterior. The chapel stood on the site next to the currently vacant site vacated recently by Dorothy Perkins. The site is now currently the premises of both Clintons Cards Ltd and Costa Coffee. The Clintons Cards unit was the original premises of Superdrug Ltd. The Costa Coffee unit was originally occupied by Curry’s electrical store. The underground section of this fantastic old chapel was occupied, for many years, by the Coke Hole Trust, for living accommodation for its local members who were homeless.

Like so many of the buildings we have featured in the pages of our Bygonne Andover section, the current very modern Andover Baptist Church Situated on Charlton Road (Close to The Folly Roundabout) hides a fantastic and very interesting historical past.

The first Andover Baptist Church was built in 1824, with just eleven local members who had all transferred from the Whitchurch Baptist Connexion which dated back to the 17 th century.

The original chapel was smaller, and by the 1860s had become too small for the growing congregation, which had increased to over 100. In 1866 the old chapel was pulled down, and a new chapel was built on the same site which opened in 1867.The new building was designed by Searle and Co, who were specialists in chapel architecture. However, the estimated cost of £1,400 increased to £1,800 by the time the new building was opened.

A house that lay between the presently vacant Dorothy Perkins unit and the old chapel belonged to the late James Baker. Although he did not live there, as a Baptist himself, he bought the property to allow for future expansion of the chapel if required. James Baker’s daughter, who lived in Southampton, insisted on approving the plans before work could go ahead and would only agree the plans if the aim was to provide a new building and not just an extension to the old chapel.

The last Minister of the High Street Baptist Church, who continued at the new premises, was the Rev Edgar Donald Coate, who continued in the role until 1984, having occupied the position since 1979. He moved to the Zion Baptist Church in Cambridge, with his wife Audrey. Rev Coate was born in Budapest, and his previous ministries have included Chorleywood, Putney and Plymouth.

In 1965 thousands of people all over the world saw views of Andover High Street, Andover Baptist Church and the grammar school in a film made by the Rev Walter Fancutt, who was Minister of Andover Baptist Church from 1945 to 1951. The film was entitled ‘More Precious Than Jewels’. The opening scenes of the film were made in Andover and the remainder in South India, during a three- month tour of Leprosy centres. Mr Fancutt became the Editorial Secretary of the Mission to Lepers. He also released another film entitled ‘Day Of The Good Tidings’, for which he prepared the story and commentary. Mr Fancutt worked with young patients at the Champa Leprosy Hospital in India. Local audiences were treated to a special charity screening of ‘More Precious Than Jewels’ which was held at Andover Baptist Church .

In 1981 a brand- new Baptist Church was due to be built on The Folly Roundabout in Andover at a cost of £250,000, for the construction, and fixtures and fittings. The work was carried out by Thomas King and Son of Abbotts Ann. It replaced the High Street chapel which had stood on the same site for 157 years. The original church featured a so- called rose window, which was thankfully retained when the chapel was demolished in 1980, and was incorporated into the new building where it remains to this day.

The Rose and Chequers in Andover